There’s not much wrong with Joe Spurgeon. So I’ll start with as much wrong as I can find.

I disagree with his too-frequent two-star allocations. But then, I would. And I wish he would stop mithering on about shows that don’t have a message or a denouement. It’s almost funny when he complains that Chris Dangerfield’s tale of being sexually abused in Sex With Children reaches “no resolution”. Is there any real resolution for a survivor of child abuse? No, but that doesn’t stop Spurgeon wanting his own happy ending. And he only felt dirty for an hour.

But apart from this, Spurgeon has a lot going for him. His reviews are light, pacey and properly highlight snippets of the show he’s talking about. He doesn’t, like so many of his peers, stick his own head in the way of what we wants us to look at: you’ll rarely find Spurgeon using a simile or metaphor that wasn’t provided by the act he’s discussing.

He treads the line between over-explaining the subject matter and the pointless set-listing you’ll find in the likes of Three Weeks, by taking a holistic approach to the jokes and the person: Of Felicity Ward he says: “The theme seems like a bit of a hindrance at times, when in fact Ward’s at her best simply giving us little glimpses of life on Planet Felicity. She re-enacts the three stages of crying to the sound of ‘El Cóndor Pasa’, gorges on German “grief bacon” (look it up) and dreams of a more practical sex line for the over-30s.”

He does a similar thing with Robin Ince: “His major preoccupation this year is science and human biology (specifically, the mind) with some characteristic forays into literature, fatherhood and social convention. Just how do you politely decline a friend’s offer of breastmilk cake?” This sort of zoom-in from generality to a specific picture is the sort of writing device you either know by instinct or have to be taught at journalism school. And how many Fringe hacks went to one of those?

And even though his search for a point can get silly, he does understand the point of silliness. “[Adam] Riches’ carefully selected audience interactions might take a subtextual swipe at male bravado, but that’s to belittle the sheer dumb fun of it all” he says.

So, as I say, there’s not much wrong with Spurgeon. He wrote Googlebox instead of Gogglebox. But in the typographic wasteland of the Fringe, that’s just picking holes.

Joe SpurgeonWriting for FEST (Reviewed in 2014) 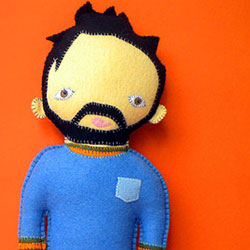