When you read Victoria Nangle’s reviews you find yourself muttering ‘Get on with it’ a lot. There’s a great deal of throat-clearing and pussyfooting, all of it taking up ink and paper that could have been used for poetry, or a treatise on human rights or something.

Looking for love is a familiar trope in Edinburgh comedy shows. Comedians’ hours are anti social—read that as perma-single—so it’s an easily relatable topic, and there’s plenty of scope for individual anecdotes as well as the broader familiar themes. Have the lovelorn idea intersect with a clown, unafraid to switch without warning between gleefully terrifying and sharply absurd, and you’re left with something truly unusual.

Clearly she’s trying to get all her metaphorical ducks in a row before offering a critique. But it’s confusing, difficult to read and largely unnecessary. It makes us think that maybe the one-tweet-reviewers have something after all. Because her second paragraph begins: “Framed loosely within the construct of a romantic date with a member of the audience, Chicken Soup doesn’t so much feed the soul as threaten it at knifepoint.” Fucking hooray. Now you’re telling us about the show in a way that offers wit and opinion. This is good. Why wasn’t this your opening? And why am I doing the Fest sub-editor’s job?

The review continues with things like “Gigi doesn’t shy from making herself appear crudely grotesque and almost demonic at times”, but doesn’t tell us how. We know, from reading other reviews, that Gigi eats onions. But using proper nouns would, it seems, stick in Nangle’s throat and make her cry. Her reviews are remarkably muddy.

Her opening lines on Matt Winning demonstrate that she’s anxious not to give any jokes away:

“There’s something to be said for starting your show with a bang. Kicking off with what he claims is ‘the most expensive opening joke at the Fringe’, Matt Winning does just that.”

This is an honourable impulse, but it tends to manifest itself in the non-description she gives of Winning’s show. Apart from the fact that Winning calls himself the son of Robert Mugabe, it’s hard to work out what else is going on.  Similarly her review of Paul Sinha reads rather like the 100-word precis comedians crank out to a Fringe Society deadline months before they’ve written the jokes yet. You keep wanting her to zoom in on something – anything – and give us a taste of what this comic is about. But there’s just a fuzzy overview about how nice it all was, and suggestions that Sinha doesn’t like Keith Lemon or Paddy McGuinness. It’s all a bit of a tease and you wish she’d either tell us these stories properly or not mention them.

It’s odd, because her opening on Steve Bugeja is cracking:

“What happens when an already socially awkward man finds himself driving the father of the girl he loves, on day release from prison, to her wedding to another man? You’ll find the answer in this touching and funny show, which takes a roomful of people on a most surprising road trip.”

It may just be that a really good premise gives Nangle the focus she needs. But really, she needs to cut the flannel from all her reviews. To adapt one of her comments about Matt Winning: It’s a shame, because she can clearly write. 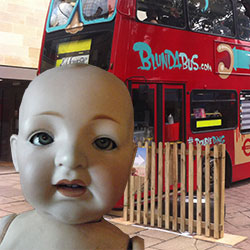