Craig Angus is a good example of how The Skinny’s new approach to reviews may not be working. Reviewers now have to see a whole bunch of shows and then, when they’re ready to share their accumulated wealth of opinion, they have to sew them all together with a causal thread. So The Skinny is not so much publishing reviews this year as putting out articles about shows and furnishing them with stars as it goes.

It all comes across as a bit forced in Craig Angus’s roundup of sketch comedy (although a roundup of Fringe sketch comedy IS very useful, don’t get us wrong). Having told us that the sketch group Daphne “finish on an a capella cockney sing-song”, he then tries to roll his observations over into the next paragraph, even though he hasn’t really made any and there’s absolutely nothing to compare them:

“That equilibrium extends to Phil Wang’s understated style and juxtaposes with the physical intensity of Jason Forbes – who plays a grieving mother and clumsy barista with glorious dramatic range – and the idiosyncratic show-stealer George Fouracres, introduced by the group affectionately as ‘the token white guy’.”

The sheer length of some of Angus’s sentences (the one above is paragraph-long) betray the fact that he is carrying too many concepts at once. He drops them all over the floor and then breaks them up with dashes and commas. He needs to take more time, concentrate on what’s important and decide whether he is going to explain the workings of his favourite jokes or not.

His approach is a halfway house: “The material is a mix of the utterly bizarre (you’ll never think of Postman Pat in the same way again), the snappy and immediate (such as a great putdown of Radio 4’s The Archers)”. As in the world of sex offenders and drug addicts, the reviewing halfway house is a sad place. We don’t know why these jokes were, by turn, ‘utterly bizarre’ OR ‘snappy and immediate ‘because he uses a lot of words to not actually tell us.

It’s not as if Angus CAN’T hit the right note of disclosing just enough, as he does with his review of Lazy Susan: “A sketch about Geordie micro pigs is otherworldly in its greatness, as if it had been plucked from a Lynchian dream sequence.” And a Massive Dad’s sketch, “an exploration of the overly-sexualised marketing of yoghurt (and other tedious foodstuffs) is bang on the money.” He can be good. But he enjoys  the sketch group Midbrow so much that he rambles on about them for far too long and loses his dynamic.

“ ‘Why do sketch groups have such terrible names?’ a friend remarks, as I read my scribbled itinerary from the back of the latest meal-deal receipt. ‘Apart from Massive Dad, obviously.’ Yes, Massive Dad…”

Whereas I normally can’t stand reviewers putting themselves into the review, in this case I was just relieved that he’d segued from one review to the next without stalling or putting his narrative vehicle into reverse.  At best it’s all very stop and start.

Angus will be a competent reviewer before too long. Perhaps, in changing the format, The Skinny has demanded that its reviewers do the critics’ equivalent of shifting from a ten-minute set to an hour-long show. Some are not quite ready yet.

Craig AngusWriting for THE SKINNY (Reviewed in 2015) 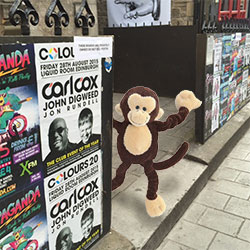