With so many Fest reviewers wanting to hunt down Fringe comedians, slaughter them in cold blood and wear their shrunken heads and genitals as voodoo fetishes, it’s perhaps refreshing to find one who just wants to inspect their private parts in a scientific way, pat their heads and release them back into the wild.

By the way, I’ve started this reviewer-review the way Tom Hackett starts many of his critiques. If you noticed, I came in at an oblique angle by talking about something related but different. It went a bit quirky for a second, but by the end of the first paragraph I’d arrived at the subject I was supposed to talk about. And so it is with Hackett. He does this. Except that I’m now at the end of the second paragraph without having discussed him at all, so actually I’m doing rather less well than Hackett.

None of this is to say that Hackett is oblique, nor in the least obtuse. He probably wouldn’t even use the words ‘oblique’ or ‘obtuse’. Instead he gets to the nub of things very quickly. In his review of Sara Pascoe last year he started with “First off…” and told us that the title didn’t work. In fact Hackett has a bit of a thing for sleuthing out titles that were written way before a workable show coalesced beneath them, but he does at least give the impression that he knows what a comedian’s life is like, Fringe deadlines and all.

In fact Hackett oozes empathy. And even enjoyment: his reviews have a certain relish in the manner they explain things, and a certain measured patience in the way the comedians’ ideas are committed to print. He leaves rather less room for his own commentary than most.

Michael Legge has “one of a few shows this year to take the presumed formula of an ‘award-winning show’ and then subvert and parody it… The overall effect is like walking into a sort of private member’s club for 40-something fans of comedy and ’80s cult music”. Sarah Bennetto is “a perfectly competent, likeable comic aiming for not much more than to play around with the crowd in the room”. And thank goodness there’s a reviewer – on Fest, no fucking less! – who doesn’t think it’s a comedy crime to have modest and achievable ambitions. It’s there in the small things too: “We are in the company of a woman who owns eight Scrabble sets”. Not “forced to endure”, or “subjected to” or “obliged to humour”, or any of the other smirking phrases Hackett’s peers would smear all over the page like a burst pustule. In the COMPANY of. He said it in a nice way. This may be why his three-star reviews do actually read like they’re nothing to be ashamed of.

There are bits where, in reviewing Nathan Caton, he sees through the schtick a bit, but lets him off. It’s the decent thing to do. Hackett is one of those reviewers who opts to do the decent thing. It’s almost as if, even when something doesn’t quite work, he can remember that he’s at an arts festival and it doesn’t really matter all that much.

Tom HackettWriting for FEST (Reviewed in 2015) 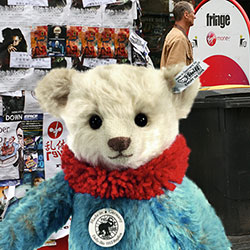