There are some toys at FringePig who seem to think that that theatre-hags and cabaret-whores and music-prostitutes and childrens’-show…erm… whatever class of degenerate they are… should stick to hanging around in their own fleshpots.

I’ve never really agreed, and so it is my pleasure to present the amazing, multi-faceted, quadruple-headed Jon Stapley. A good few days into each Fringe Stapley will have a break from his usual worthiness and take a look at the comedy. And then he goes home, or to the office (sorry, this is Three Weeks… he goes home, or to a McDonalds with wifi)… and he does a bloody good job of typing it up.

Stapley comes up with some intrigue for Murder She Didn’t Write about how the audience were led to believe they were suggesting themes for a murder but, in the end, didn’t really contribute to how it was staged. Perhaps that’s where the show’s name came from. But we don’t get to find out because Stapley runs out of words and can only conclude that “the clear potential for something really special wasn’t reached”.

Stapley does his best, though: “With a musical number in the first five minutes, and a double male striptease in the first fifteen, Giraffe’s blistering show lets you know what you’re in for pretty quickly,” he tells us, providing a similarly express service. He was similarly circumspect about WitTank last year, writing that “As the school’s preposterous headmaster, Naz Osmanoglu mercilessly hoovers up the biggest laughs, though all three members do get to shine.”

Stapley never butchers anything or over-reaches himself with florid epigrams. He’s just the sort of person to do a good job in a tiny space. At least, he is most of the time. 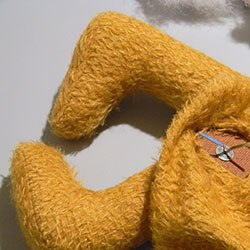