Joseph McAulay concerns himself with theatre in the main, and makes only occasional sorties into comedy.

While a thesp overview of comedy is sometimes helpful and revealing, McAulay gives the overall impression of someone who wishes the comedy he’s watching could be a bit more – well, theatre-y. It’s clear that he sees the driving ambition of comedy (to make people laugh) as rather a low target. Of This Is Your Trial he concedes that the comedians managed to do the very least expected of them: “Both did a competent job of using the format to make witty and interesting jokes”. He continues: . “These did admittedly produce funny moments. Overall the show is enjoyable, but that’s almost the problem: it’s just enjoyable… you’ll have a few drinks before, laugh at the time…” To which you sort of want to say “Not everything is Titus Bloody Andronicus, Joseph.”

In case we hadn’t realised that he was roughing it, he lets us know quite clearly at the end of reviewing John Robertson’s The Dark Room: Symphony of a Floating Head: “It’s not often than I find myself enjoying myself in a pitch black room surrounded by other sweaty fringe goers while an Australian man shouts at me. Anyone who can make an hour of this entertaining deserves to be checked out.” How does the adjective ‘Australian’ play in the awful environment the critic overcame? Is it being used as a pejorative like ‘horrible’ or ‘stinky’?

In any case, the fact that McAulay is happy to put himself three times into five words: “I find myself enjoying myself” tells you who is the most important person in his reviews.

This may be why McAulay emphasises whether or not he has enjoyed himself – which, to older comedy reviewers, is as gauche as a restaurant critic talking about the actual food – and whether he’s seen anything life-changing. We can’t argue with that in principle. He certainly understands what he sees: his description of John Robertson as “a deranged dungeon master on a power trip” who “holds the entire show together through his presence and charisma” is a good precis. He’s pretty shrewd when he gets away from himself.

The accompanying picture of McAulay makes him look about 7. Maybe he’ll develop a bit more empathy as he ages.

2 and a half stars, Billy Coconuts, Broadway Baby, John Robertson, The Dark Room, theatre, This Is
Previous Reviewer-ReviewClaire Smith
Next Reviewer-ReviewJon Stapley 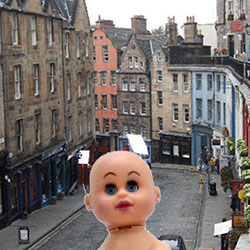