Claire Smith – or ‘The Scotsman’s Clair Smith’, as the Wow24/7 website denomes her – is every bit as good a reviewer as you’d expect a veteran hack to be. (Note to comedians: ‘hack’ is not a pejorative term in journalism.)

You might not agree with everything she writes, nor the assumptions on which she builds her arguments. In her review of Felicity Ward she writes that “a lot of creative people fear analysing their quirks”, despite working in an environment where 1,200 comedy creatives want to talk about their quirks for a whole hour. And her comment that Henning Wehn’s “joke telling is as dry, logical and precise as German engineering” is the sort of thing a freshly-minted student reviewer would think is really clever.

However, such bumps can only jolt the reader because the rest of the road is so smooth; on the whole Smith’s reviews are marvellously clear, articulate and witty without giving the impression she’s trying to compete with her subject. She tells us that “Candy Gigi eats onions, disco dances in a pig mask and false boobs shaking maracas, and simulates sex with a blow-up doll dressed as a Hasidic Jew. She talks about poo and dirty sex and does unspeakable things to a real chicken”. This seems to commit the reviewing sin of set-listing, but the important thing is that Smith only does this where it’s genuinely intriguing. And it certainly is with Candy Gigi.

Smith’s matter-of-factness results in some statements that don’t sound like passages on the way to critical approval but in fact are: “Ward has galloping irritable bowel syndrome, severe anxiety and bouts of depression”. “[Christie] begins by constructing a ludicrously grotesque definition of a feminist”; “Christie lengthily, wilfully and deliberately misses the point of Nigel Farage”. It’s a small thing but helps reinforce Smith’s ability to hold a show at arm’s length and to see it before she judges it.

I have a small problem with her comment about This is Your Trial that “Defence lawyer Rachel Parris probably should have laid off the Chardonnay before the performance”. If she was drunk then tell us, but let’s not jump to the conclusion that pretty blonde girls only quaff bimbo juice. Well, not if you’re going to declare an admiration for Bridget Christie.

Are we allowed to say that girls are pretty? Of course we are. Although I did wonder how Candy Gigi’s “lovely skin” was a vital factor next to her pig mask and onion-scoffing. But if such minor improprieties are the price of seeing some old-school professionalism on the Fringe then it’s a price worth paying.

Claire SmithWriting for THE SCOTSMAN (Reviewed in 2015) 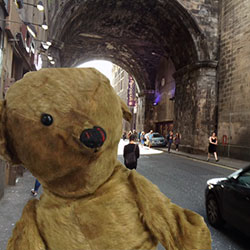