The good news is that Tamarin Fountain writes very clearly in plain English. Her style is friendly in a sub Marge-Proops way, and she lets you know what’s going on without getting too deconstructive: “This show is riotously funny and provides a steady stream of hilarity, a few aahs and oohs, and even the odd shriek along the way. If you like the absurd and skilled silliness, you will love this.” She thus gives us a lovely overview of Plague of Idiots. And she uses the word ‘lovely’ sometimes, too, which is always a good thing.

But it’s difficult to gauge what, exactly, Tamarin Fountain is doing with her life. She seems to have a thing for improv (as all theatrically-minded reviewers who take a punt on comedy do), but the thing is this: She absolutely HATES getting involved.

During Plague of Idiots “There were a few moments of audience interaction which were too invasive for my liking, and with which I was not entirely comfortable.  But then again, I do have terribly British sensibilities when it comes to these things”, she shudders.

Blind Mirth aren’t quite so scary: “Those words – ‘audience participation’ – always make me nervous, but here it is gentle and entirely optional.” What’s she doing? It’s like someone going to a brothel just to squirm in horror at the brazen immorality of it all (I don’t mean to suggest, by the way, that prostitution is as bad for society as improv). And then, when she goes to see Le Beau Zeaux, she complains that the audience aren’t sufficiently involved and none of their suggestions were properly employed.

We shouldn’t get the idea that Fountain doesn’t understand improv, though. She understands it so much that she wants to make sure WE understand it:

“We are encouraged to shout out ideas as contributions to the set-ups of various scenarios and, in doing so, become collaborators in the creative process of each show’s formation. Whilst the onus is on the performers to work imaginatively with whatever random offering they receive, it will inevitably be easier to find the comedy in some suggestions rather than others, a major factor in the variance of each night’s level of success.”

So there we go then. 78 words. A mini-essay on the challenges and pitfalls of improv that somehow neglects to mention “Some audience members will keep turning up even though they are scared shitless of being asked anything and thus are as much use as a Mike Leigh film in a suicide intervention.” It’s not as if her potted guide has even helped her very much: “In an improv situation where scenes can quickly become abstract, garbled dialogue combined with unfamiliar games sometimes left me wondering what on earth was going on.”

Damn it Tamarin, it’s a minefield out there. 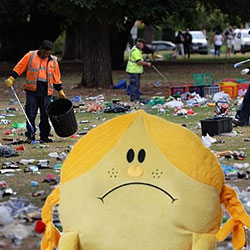