Stuart McKenzie isn’t a bad writer, but his prose is a bit tatty and some of his statements could do with being unpacked. There are missing words, and words that have no real business being in the sentence they find themselves. It’s nothing a good sub-editor wouldn’t sort out for him, but this is Broadway Baby, the Congo of journalism, where absolute basics such as fresh water, cooking oil and subeditors are not just unavailable, but regarded as a crazy story misremembered by old people.

McKenzie could do with maintaining some professional distance. In his five-starred review of Best of Scottish Comedian of the Year, he comes across as altogether too pally and involved with the thing: “In fact, yours truly was given a wedgie by stage presenter Ray Bradshaw, and I still ended up buying him a drink,” he chuckles. Things like this put a review in bad odour. Still, if you want a good review from McKenzie, you know what to do.

He has plenty of enthusiasm, and his review of Matt Okine gave a good flavour of the show, with nice phrases such as “Beyond his humour, however, Okine reminds us to be grateful for what we have in our lives, though his political stances do not inhibit his comedy”. But he takes the edge off with non-statements like “I highly recommend his act to those who love comedy” – as if he might recommend some other specific act to those who loathe and detest comedy. He also uses the word “charismatic” far too much.

It’s little things like this that make McKenzie read like a school newspaper journo rather than the real thing – not that he necessarily wants to be the real thing, of course. Maybe he just likes hanging out at free gigs with his mates, and getting wedgies. We get that impression, anyway. 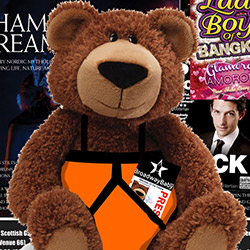