We assume that this name is ersatz, since we are very clever here at Fringepig and I know that RM Ballantyne was a Scottish children’s author in Victorian times, who wrote such ripping yarns as The Coral Island, forerunner to the altogether more dystopian Lord of the Flies.

Of course, I could be wrong. It is entirely conceivable that there would be another RM Ballantyne, just as there’s somewhere, undoubtedly, a k d lang who spells her initials with capitals and likes cock. Somewhere there’s a panda, beloved of another Becky Walker, who isn’t half as clever as me. There is a universe within any name; of course there is.

So excuse me if I get this wrong, but I’m going to refer to this Ballantyne as a ‘he’ in tribute to the other one. I beg forgiveness if this is wrong, but there are no clues in the reviewer’s prose and, while I should hate to make impolitic assumptions, I do need a gender-specific pronoun in order to write this.

So: R M Ballantyne. He has the air of someone who has seen it all and is now a bit fed up with it. Not, I must stress, the faux-worldweary gasping and huffing of a freesheet zine reviewer but an altogether more mellow ennui: jaded, corked, weathered and tarnished. The person behind these reviews is either on older person or a youngster wizened before their time.

“It seems to me that the audience that would most enjoy this show in any numbers are more likely to be sitting around after a few cocktails on their cruise ship lapping up tame tales of a wild life and the nostalgia of their childhoods,” he concludes of All-Nude College Girl Revue. Of The Goddess of Walnuts he says “Don’t let the ‘walnuts’ in the title fool you. This is better described as an old chestnut.”

I wish he would like things more, but at the same time he explains his problems with them so lucidly that I can do nothing but sigh resignedly, the way that resigned sighs echo throughout these reviews. I don’t know why such a chap would go and see the memoirs of Caroline Rhea, but I can certainly appreciate that hearing the adult Sabrina the Teenage Witch do a transatlantic Scots accent must be very trying indeed. I just want to run RM a hot bath at this point.

Stranger, though, is his account of The Bitches Box. How can something in which “Most of the audience laughed, howled even” and is “one bitchin’ good show” come away with a three-star review? This was RM’s chance to find some last vestige of joy in the world; to rail against the dying of the light.

Most SGFringe reviewers are star-chuckers; you’re unlucky if you get this mysterious cove (or covette) along. That’s not to say that these reviews are not well written, or enjoyable: they are. 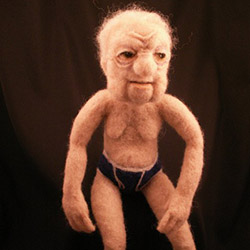