You’ll have to see it to understand why it’s called that.

The show is about how difficult it is to STAY married, how you love your kids SO MUCH it sucks but how, ultimately, it’s all about LOVE and who doesn’t want love in their life, so hey, best get on board.

It was the heats for the Funny Women competition. I’d done their workshop and they were insistent. I’d heard my whole life that I was funny so I thought why not? Who will care? I told NOBODY – I just went. I had never seen live stand up at that point in my life. Just one DVD of Eddie Murphy. I went to the heats on a Sat evening in Soho because I was SO BORED OF BEING A STAY AT HOME MOM. My parents were visiting so they were with the kids. I had no idea what a ‘set’ was or anything. I just got on stage and talked about my mother. I remember not being able to hear myself, but hearing the audience’s responses very clearly (all very good, thank god). It was a giddy experience that I simply knew I had to repeat. And here we are.

I always picture my mother telling me I can do it.

I’m waiting to get a bigger sample size in reviews to decide which my best and worst reviews are… four reviews does not an opinion make, as they (I’m not sure exactly who) say.

They are doing their job.

I don’t know what the law is around this stuff and I don’t want to go read up on it now in order to answer this question. What I will say is: if its the law, its the law. Break it, take the consequences.

Punching down at truly vulnerable people is always ugly. Never makes me laugh. Provoking/shocking an audience into giggling is not the same as writing a joke that makes them giggle.

On stage with my jokes? No. Otherwise, yes, probably especially if you check with my family.

The first time I played to a theatre of 400+ people. They had all come to see ME! I couldn’t believe it. I was quite new to comedy and this was in India (Delhi, where I’m from) where I had told NO ONE that I was a stand up. And I naturally fell into gigging in English and Hindi. I did 50 minutes. It was unreal.

I think the most gratifying bit was afterwards when a bunch of my classmates from the convent I went to aged 11-13 came to the green room. I hadn’t seen them since then and hadn’t been in touch at all. We were all married with kids at this point. They had seen the ad for the show and just all come. They rushed into the green room and we all hugged and shrieked like school girls and they said ‘you always were the funniest in class and now look you are making everyone laugh’. To have them there saying those things and reminding me that making jokes had always been a big part of who I was was very validating and gave me a massive surge in confidence. Plus it was good to see how well we had all aged. Probably something from being around all those nuns all those years (not).

Find Sindhu Vee on the web - 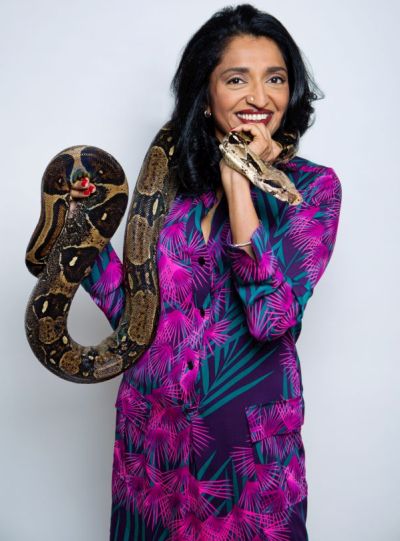 Find Sindhu Vee on the web -

I’m waiting to get a bigger sample size in reviews to decide which my best and worst reviews are… four reviews does not an opinion make, as they (I’m not sure exactly who) say.