“It’s a confusing thing, when someone you want to like tells you he’s a serial adulterer” says Kyung of Will Mars, seeming to commit the cardinal sin of letting pre-held scruples usurp his judgment. It’s forgivable, though, as Kyung’s reviewing style is for the most part well-reasoned and very clear.

He’s even willing to give very famous comedians two-star reviews. Such shocking lèse-majesté is usually the work of feisty young shavers who want to be comedy’s Johnny Cigarettes*, but Kyung throws stones at giants without any sense of self-aggrandisement, saying of Rich Hall that he realises he’s a big name but he just didn’t get it. SHOULD he have got it? Well, that’s not for us to say.

Kyung’s reviews sometimes come in at 20 words under the stingy limit set by Three Weeks. It’s a shame, then, that he sometimes spends so many of them on describing the obvious. “He occasionally caught me off guard, making me (and the rest of the audience) laugh out loud,” he says of Javier Jarquin. Well, good. You do know that that’s what’s meant to happen in a comedy show, don’t you?

We assume he DOES know; Kyung reviews for Cambridge Varsity. His exposure to the arts may explain the slightly jaded tone and a slight stinginess with the stars. On the whole, though, Kyung is as sound a reviewer as you’ll find in a photocopied freesheet. 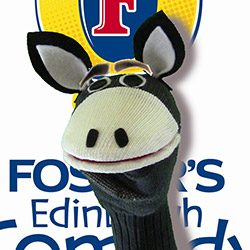