You know how preachers – of any religion – will tell you that God knows you far better than you can know yourself? Well God knows nothing next to John Stansfield. John Stansfield looks down from on high upon the piddling little comedian and knows exactly what they think they are, what they think they’re doing and why they shouldn’t do that. And having scoured their souls he tells them to go back to Ninevah, or wherever, and tell the people of his displeasure.

Whereas other reviewers might hedge their bets by telling us that a comedian “seems to” be doing this or “tries to” do the other, or maybe that their demeanour “suggests”, “infers”, “celebrates” or “plays on” something, Stansfield has no time for such flannel. Of Colin Leggo he writes “Given Leggo is a standup, he attempts to hit the rich vein of comedy that comes from prolonged personal agony.” He’s in such a rush to tell us what Leggo is trying to do that he doesn’t realise that he’s dangled a modifier more apparent than a missing leg. And then he tells us that Colin Leggo doesn’t really dwell much (or, at least, not as much as John Stansfield would like) on his personal agony.

Similarly Stansfield tells us of “the slacker philosophy that [Fin Taylor] believes is his schtick”. So, Fin Taylor: you don’t know what your own schtick is. John Stansfield does. “There is a bright, fresh comedian lurking there behind the mask,” he reveals. It’s unclear whether he is telling Taylor to step into the waters and be cleansed, or to just get some decent clothes and a haircut.

With such cutting to the chase, Stansfield is, at least, economical and to the point. You certainly couldn’t accuse him of eking out his executions. Yet in the haste there are errors. Although I can see from the stars that Stansfield enjoyed Brett Goldstein’s show, Burning Man, I couldn’t pick up much sense of what the show was about except that it “culminates in a trip to San Francisco’s hippy mecca Burning Man”. Doesn’t Burning Man – at least, the main event – take place in the desert of northern Nevada? That is, about 400 miles from San Francisco?

Not that such errors are fatal; it’s just that if you take the tone that you know everything then you ought to know that Burning Man isn’t in San Francisco when you’re, say, reviewing a show called Burning Man. Apparently Goldstein went there (wherever it is that he went) “to rediscover what it is to make comedy after a mother’s well meaning question was received with such existentialism”. You may think that there is some context in the review by which this statement makes sense. There isn’t.

Stansfield’s problem (if I may be as presumptive and as prescriptive as he) is that, paradoxically, you have to explain yourself really well to be haughty and dismissive. Stansfield tries to sweep comedians off his shoulder like they are specks of dust. But it is all too evident that Stansfield, like all flesh, is made of dust.

John StansfieldWriting for FEST / THE SKINNY (Reviewed in 2015) 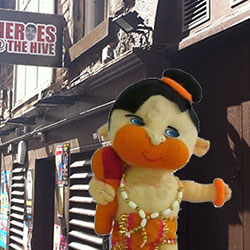