I’m starting to lose my faith in One4Review. In a year when Steve Bennett and Julia Chamberlain seem to have decided to do all their own spelling mistakes, One4Review seems to have spawned a whole new clutch of single-named review monkeys (all of which we’ll surname ‘Geoff’, because that’s what we do).

We assume Gill is a mother, or else fuck knows what she must have felt like turning up to Flamenco For Kids. I’m just imagining her standing there with her notebook while seventy floor-thumping mini Carmen Mirandas go apeshit all around her (“we can all only hope that our children don’t decide to practise their stamping too early next morning,”) she concludes. No I think she definitely has kids, and that they may have distracted her while she was trying to write about Nick Doody. Well, see for yourself:

“His opening about buying a hammer then wanders past Edinburgh flats near schools, and inner and outer versions of ourselves, with some black humour, but always interestingly different, and consistently very funny.”

What’s going on there? A noun has been murdered, possibly with Nick Doody’s hammer (“You had to be there … I’m glad I was there”, she concludes). Anyway it’s hard to care. It’s just One4Review. Five stars means they were pleased to get away from the sheltered accommodation for the afternoon; one star means the show was a bit noisy for them and they had the change the batteries in their hearing loop, or they had to leave early to get yoghurt out of a tweed jacket. It doesn’t fucking matter. It’s just One4SoddingReview.

However, last year Gill said, in the course of reviewing Bob Blackman’s Local (and kudos to her for seeing some cool and subcutaneous stuff, by the way) that “It’s packed with silliness, changes of pace, and random, utterly surreal moments… It almost feels like cheating that this charming craziness is in a well set up room of a sensible temperature and not leaking. But you can’t have everything.” And I thought, you know what, I don’t care if she IS a frazzled, burned-out mother of 11 who, like her imaginary colleagues, is too scared and lifebeaten to see her own surname in print. This lady understands the Fringe.

She has that inner sadness that finds comfort in the late-night desperation of the Festival grind. That fake-flower smell of toilets, the shocking Lothian breeze when someone leaves the door open; that last bottle of fruity cider you don’t really want because your stomach hurts. That sense that the room you’re in, and the souls who surround you, is all lonelier than the empty bed you have to return to, and will there be a chip shop still open? All of this, and so much more, is there between the lines of One4Review’s Gill. Probably. At any rate, she seems human. 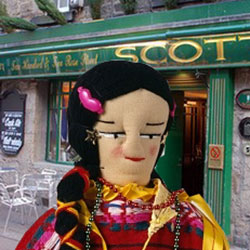