There is the occasional nice bit of phrasing in Dawn Kofie’s reviews. They occur when she is just saying what she sees. Stuff like “there’s a weirdly lyrical description of [Rob Delaney] taking a Peeping Tom role when his friend’s neighbour has an S&M party.” This, at least, makes me want to see Delaney’s show.  And “the inside of his cheek’s probably bruised from having his tongue pressed so firmly against it” is nice. But the problem with Kofie is that she says an awful lot that you just want to call bullshit on.

Take, for example, her opening line on Delaney – or, to quote her – “the hirsute bear of a man that is US comic Rob Delaney”. What if I were to start this review with “the smooth-skinned sparrow of a woman that is Dawn Kofie”. Would that be a reasonable way to kick off a review of her work? Or would that just be weird and creepy, even though I’m a stuffed toy? I know that physicality informs a comedian’s sense of presence, but being large isn’t really a thing that Delaney trades on that much. He was just born that way. Is it fair to nail him down with ursine metaphors before he’s opened his mouth/gaping maw?

So when Kofie goes on to say that he is “better known for being the Comedy King (her caps) of Twitter and for starring alongside Sharon Horgan in Channel 4’s funny and frank sitcom Catastrophe, than for his stand up” I’m inclined to think, well, you mean better known to YOU, Dawn Kofie, because Delaney has been in stand-up for years. Whereas you haven’t. And I think you just Googled “Rob Delaney” when asked to review him.

For the most part Kofie is bluffing, and this makes her didacticism all the more annoying. Take her review for Upstairs Downton: “Upstairs Downstairs and Downton Abbey … lean towards the melodramatic. But The Highly Irregular’s stage interpretation attempts to play for laughs.” YES, well that’s because it’s a comedy, Dawn. “Each episode is improvised and based on suggestions from the audience” YES that’s usually what improvisation is, Dawn. “The cast … switch between a range of disappointingly time-worn characters e.g. the dim maid, the idiotic Lord and the acerbic, elderly matriarch”. YES but are they ‘time-worn’ or just familiar from the programmes these people are parodying? Because you do know that you can’t do a parody of something that’s not familiar, don’t you Dawn?

I don’t mean to be rotten to Dawn just because she’s fresh to this. There’s nothing wrong with being new at something. But I wish she wouldn’t tell us old grannies how to suck eggs. I think this reaches its apotheosis when she tells us that Andrew Doyle is a bit like Stewart Lee because he “is deconstructing stand up, and raging against the diktats that govern it, such as ‘thou shalt be topical’ and ‘thou shalt have a cleverly constructed narrative’.” These diktats are written by reviewers, Dawn, not by comedians. So is he really “raging against” them? Or have you just realised that he’s not doing the normal thing, and so you’ve backhandedly commended yourself for not stamping on him too hard? (An “ambitious and fiercely intelligent show” – three stars.)

There’s not much to Kofie’s reviews that can’t be debunked with five minutes of research or a reasonable grasp of comedy. Or, I would suggest, with an hour of going to see the shows she dismisses for yourself. 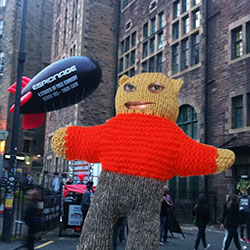