There’s a certain sort of FringePig reader who only reads the reviewer-reviews that are two pigs and below. Some of them even write in to ask why we bother praising some reviewers, suggesting that’s not what we’re here for.

So it’s with apologies to these readers (probably, let’s face it, 90 per cent of you out there) that I must gingerly shrug my leopard shoulders and present our first reviewer-review this year: the altogether rather excellent Larry Bartleet.

There is space to argue whether such exotics are necessary in a Fringe review aimed not just at the unwashed but the Broadway Baby, freesheet unwashed. I doubt whether many people on my street know even what tautology is.

Yet Bartleet can be forgiven the occasional bit of dictionary diving; it’s the way he strings things together that marks him out from the notebook flock.

For example there’s his review of Rhys Nicholson and “his mischievous jokes, which march deep into taboo territory and, on occasion, bring back considerable spoils”. Or Sara Pascoe, whose “set succeeds in providing keen intellectual engagement, perhaps at the expense of a definitive moment of hilarity”. Of Kitten Killers he observes “It’s the intense speed of the scenes that deprives them of the success they deserve”.

It’s hard to sort his mild rebukes from his faint praise sometimes, but it doesn’t really matter – everything Bartleet writes is tremendously considered and lyrically competent. The worst anyone will feel is the sensation of being hit round the face with a scatter cushion.

If you could have Steve Bennett without the spelling mistakes, then you would have something approaching Bartleet’s breadth of vision, but it’s the fun had in the approach that makes all the difference.He assesses comedy in the process of enjoying it; never the other way around. It’s hard to say if Bartleet will keep this up as the Fringe drags on but, looking at last year’s output, it seems perfectly possible.

He can get a bit carried away, such as the review of Austentatious with which he opened this year’s batting: “Did they all know what a jalopy was? Nay! Did they flinch? Verily, nay!” Bartleet is very keen to point out careworn tropes, so he should know that every bleeding year some reviewer attempts to review Austentatious in the style of Jane Austen. And to be honest ‘verily, nay’ sounds more Shit-Faced Shakespeare than Austentatious. But you know what? We’ll put it down to high spirits at the start of the season.

So apologies about the early outpouring of pig stars. We are not starting out as we mean to go on, and will continue with this very much behind us. If you’ll excuse the repetitively tautologous neoplasms. 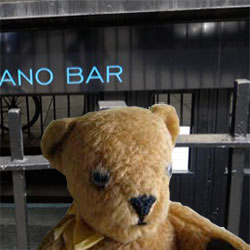