If you’re going to give someone a two-star review, Hilary, have some mercy: do it quick and do it clean. A 500-word dissertation on everything that happened in a show, along with what was wrong with it, seasoned with innumerable little jokes of your own, is inexcusable. It’s the reviewing equivalent of the axeman who took 27 swings to get Mary Queen of Scots’ head off.

This is the first of three cardinal sins Wardle commits. The second is to extrapolate a comedian’s character, status and attitude to life through the person he plays onstage. Talking of Mark Dolan’s list of things that are awesome, she fumes: “He probably wrote them down on the train on the way to Edinburgh, while chuckling quietly to himself in the first-class carriage.” (Yeah! I bet Dolan doesn’t even have to use his mum’s lukewarm bathwater, the bloated kulak.)

The third is to let her florid way with words run away with her. This results in overlong – and sometimes quite boring – analysis and the occasional mixed metaphor, as with Sam Fletcher: “It feels like a primordial soup full of swirling ideas for stand-up; some of which have the potential to evolve and others that should be consigned to the drawing board”. Fossil record, Hilary. Consigned to the fossil record. Or the annals of time. Or the shale beds. Or the Devonian clay. Or… I dunno, something that goes with primordial soup and evolving. Just concentrate when you’re kicking a comedian to death, will you?

Most of the time Wardle is a good writer; we know that from the lack of typos and grammatical car crashes in her reviews – everyone knows Chortle can’t afford a subeditor, so she clearly gives these essays the time they deserve.

But to be as harsh as Wardle – and she is pretty harsh sometimes – you need to command respect. Sadly the reader is left wondering whether some of her more artful paragraphs are written to benefit the showgoer or to impress us with her prose style. Sometimes it is truly impressive: one show was “tonally jarring: a bit like finding a set of instructions for cooking meth in a Jane Austen novel”. Nice. I mean, it’s nasty but it’s nice.

By the way, this review is 458 words long. It’s too much isn’t it, Hilary? It’s unnecessary. You’d probably prefer it to be shorter since it’s not all that complimentary. But look, it’s still going on. And on. I’m still talking. As Mary is reported to have said with her last bloodied breath: “For the love o’Goad man, make an end!”

Hilary WardleWriting for THE INDEPENDENT / CHORTLE (Reviewed in 2014) 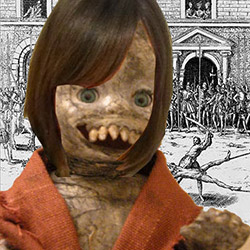