Reviewing the Best of Edinburgh Showcase Show, Bagnall begins: “Much like Arthur’s Seat is the bedrock of Edinburgh, comedy is the bedrock of the Edinburgh Fringe”. Well, Arthur’s Seat is a volcanic outcrop; one that is largely devoid of topsoil and has been subject to a great deal of erosion and vertical fracture. Bedrock is a stratigraphic term meaning unweathered, consolidated rock that lies at a horizontal distance beneath the soil layers. So nyeah, Bagnall. I hope you’re better at reviewing than you are at geology.

Well, she is. At least, I think she is. She was not at all phased by Red Bastard and showed an acute understanding of the performance without giving the game away OR slipping into hackish non-statements. This is much harder than it looks. “This show is offensive, off-putting, uncomfortable and fantastic, a terrifying combination of the improvisational, the improbable and the impossible,” she concludes after three paragraphs that make perfect sense and are entirely well-constructed. Reading a Bagnall review in the middle of Broadway Baby is like finding a bacon sandwich in a vegan buffet. It’s gratifying.

Bagnall’s muscular approach is a little less useful when discussing a showcase such as the Best of Edinburgh Showcase Show, however. It’s a showcase – if one of the better ones – and that’s really all there is to be said about it, but Bagnall discusses it as if it’s a new staging of War and Peace, using terms such as “belly-achingly riotous” and “perplexed and slightly aroused”.

I’d give Bagnall four pigs any day. It’s a shame, then, that I can’t give her more than one pig. Bagnall reviewed for Broadway Baby in 2013, the same year that she brought a show, Single Married Girl. Reviewing other artists while performing yourself is naughty. It’s like eating your dinner in the toilet. No. We don’t give more than a single pig to anyone who does this. Go directly to reviewer’s jail! Do not pass Go! Do not collect £200!

Incidentally, The Scotsman’s Claire Smith reported that Bagnall’s show was “clunky, awkward and infested with half-digested chunks of wisdom from self-help books. Several members of the audience were very close to falling asleep”. So maybe stick with the reviewing, eh? 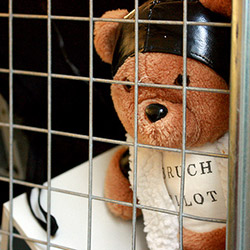