One thing I’ll guarantee you: You won’t read a Grace Brennan review and then rush out to buy a ticket. This reviewer takes a somewhat low-powered perambulation through the thing she’s seeing that, such that – even within a Three Weeks one-paragraph writeup – there’s ample space to nod off.

Now and then a sentence will grab the attention. For instance, when she writes that “Harriet Dyer bounces about the stage, reliving her wilder days and cracking jokes that have you laughing in dismay” – Although I’m left wondering how you laugh in dismay.

Despite her unwillingness to engage in hyperbole, Brennan is actually rather good, especially when it comes to summing up a show in one apposite comment. Of Lords of Strut she says: “If Louis Spence hosted a teleshopping programme, this would be the product”. Of a show on the top floor of a double decker bus she tells us “the venue quite literally sways with entertainment”. It’s not always clear what Brennan is talking about (a complaint that Lynsey Bonell’s show suffered from ‘opacity’ was, likewise, anything but transparent). But for the most part Brennan is a reliable, and certainly sober, member of the Three Weeks team.

Oh, one other thing. Three Weeks seems to be running a photograph of Brennan wearing her school uniform. So let it not be said that we at Fringe Pig are harsh to young reviewers. 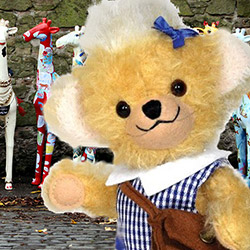