Emily Edwards divides everything put before her into “worth going to see” and “not worth going to see”. This, you might suppose, is the unspoken task of the critic – but still it seems a little crass. Most reviewers of modest talent do at least couch their words in “if this is your sort of thing” territory, but Edwards has no such qualms. The end result is a bit like that programme with Vernon Kay that divided everyone into fuckable and minger.

It is a general fault of Broadway Baby that it gives people with little to say far too much space in which to say it. For Matt Gibson’s Stand Up Sat Down she doesn’t so much knock the performer so much as cut him into pieces and post them back to his mother. This sort of dismemberment can be useful – cruelly funny, even – at the hands of a skilled writer, but with Edwards it’s very clear that the violence is being meted out by a cross old lady in the body of a schoolgirl. “Gibson has nothing to offer”, she concludes, unnecessarily, as she wipes her hatchet on her apron and the blood sloshes into the gutters. The show My Name Is Christian Grey was similarly found with vital organs removed by this most Whitechapel of critics.

Of Al Green’s Jack Spencer: Sex Addict she says: “The fact that he sticks his head up from behind the curtain, claiming that he is ‘just checking that everyone is still here, people tend to walk out at this point’ says it all really”. If you’ve seen this show, you’ll know how widely she’s missed the point.

A shows that Edwards DOES like, Joke Thieves, has its concept so tortuously over-explained that you would be forgiven for thinking that the idea behind it was both complicated and boring. Edwards would benefit from a sub-editor, both to cut her ramblings down and to tidy up the typos – an awful lot of her sentences have an odd structure, with missing or superfluous words.

We can, however, credit Edwards with a sense of mission as singular and self-assured as the late Mary Whitehouse: time and again she uses the word “offensive”, as if that in itself is a valid observation at the world’s largest and most diverse festival. Edwards is perhaps too easily offended to assess comedy, at least to divide everything into good and evil like a Presbyterian grandma. 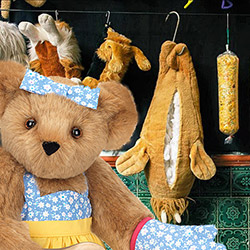