I’ll be honest with you, Elspeth Rudd got my back up right from the off. “ELSPETH RUDD is currently an undergraduate studying English at Bangor University,” quoth her bio. “This will be her first Edinburgh Festival and she isn’t entirely sure what she is letting herself in for!” Well hey, Elspeth, it’s only people’s lives and careers you’re going to be raking over as you wonder what you’re doing with your life. Feel free to take misaimed potshots at ART as you totter about dizzily on your little newborn-foal feet. I mean, fuck me, the important thing is YOUR journey, Elspeth, so you take your time and just say what you see like a lobotomised middle-manager playing Catchphrase.

I don’t need to tell Elspeth any of this, of course. She already knows. All her reviews read along the lines of “He made me laugh a little bit, but not a big laugh, and then I had a chuckle, or was it a titter? Anyway after that I didn’t laugh hardly at all and then I laughed a bit again just before the end”. Rudd has no sense whatsoever of speaking on behalf of the unknown comedygoer, or of representing the people at large. She can talk only of what happened to Elspeth Rudd, and whether or not she laughed.

Rarely, Rudd notices that there are other people watching it too. “It wasn’t hilarious throughout; that said, there were plenty of laughs from much of the audience,” she concedes of Stella Graham. She calls Michael Fabbri’s Buffering  “hilarious” and “very funny” twice in her review. But her three-star award, and her tone, make it hard to credit that Rudd feels her words. And she adds that he only mentions ‘buffering’ once, which is wrong, because there wasn’t enough buffering for her liking and so it wasn’t “cohesive”. I wonder whether Rudd had arrived with a particular keenness for buffering and so left disappointed.

Such achromatic prose is a problem. Rudd could be forgiven if she had the slightest bit of enthusiasm for comedy, but she appears to have sat through pretty much everything with little emotion except a sense of arse ache. Even when she gives a rare five-star review the account of it is so dry, matter-of-fact and emotionless that you wonder whether she was actually there. 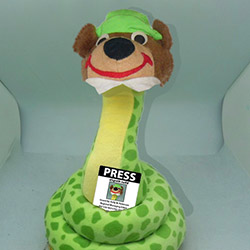