Craig Naples has this infuriating habit of trying to give a tantalising flavour of something but just being bloody annoying. When he tells us that Scott Gibson: Life After Death comes “…with one moment in particular (involving a matron and a pillow) … is swift yet chillingly clinical and grotesque”, he applies FOUR adjectives to something WE KNOW NOTHING ABOUT.

In discussing Bethany Black’s show, her outlook on life is “exemplified by ’getting her priorities right’ over a broken leg” What does this add to our understanding of the show? How is it better than saying that there is a bit about a broken leg that is particularly funny, or revealing, or… well, just something more useful than taking a disembodied phrase, sticking inverted commas around it and dangling it in front of us as if to say “Ah, I know what I’m talking about but you don’t!”

I mean, take the ENTIRE FIRST PARAGRAPH of his review of Scott Gibson (and we’ll ignore the dangling modifier):

“A big, gallus Glaswegian, Scott Gibson demonstrates why ‘men’s first aid’ can need a wee bit of back-up from the NHS where sudden headaches are concerned, especially ones that make you go blind.” It continues, but I won’t. Full marks to Naples for not giving anyone’s punchlines away. But there are better and more inventive ways of giving a flavour of a show than nebulous non-explanations of jokes and routines.

The thing is, he can do it if he can be bothered. Reviewing Twonkey’s Mumbo Jumbo Hotel, he explains the general premise succinctly before focusing on a detail, “with songs about, say, Santa going on an opium binge and having nothing but broken badminton racquets to give away.” See, that sounds intriguing. And nothing has detracted from my experience should I choose to see it. And the review, concluding with Twonkey’s line “we’re going to have to live with these memories for the rest of our lives” perfectly ends a thoroughly well-written and satisfying review.

So I would say to Naples: Stick with the explaining and the exemplifying; stick the alluding-to in the bin. 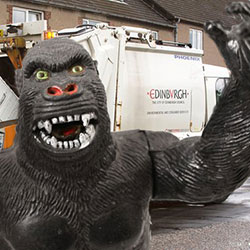