Is there no end to the journeyman reviewer who, having seen a bit of comedy on television and gossiped about it in the Loft Bar, decides they know enough to judge the work of those who actually attempt it?

Thus the world has Charlotte Goodman, one of about a million people who have turned up on the doorstep of Broadway Baby asking for free tickets and an ego boost at the expense of comedy. But then, who cares? Comedy’s not a REAL thing, is it? If it was a real thing there wouldn’t be hundreds of reviewers seeing 40 theatre shows and then two bits of comedy on their day off. It’s just there as a palate-cleanser; a sort of artistic sorbet.

So Charlotte Goodman has seen two shows, one she dislikes and gives two stars to, the other she loves and gives four. But the curious effect of her writing is that I feel far more compelled to see the one she dismisses, because she just gives the impression of someone who is missing something. Rob Carter’s show “ends with Carter prancing around in a tight cat costume, singing the lyrics ‘I’m pretending to be a cat, I’m just pretending/ I’m not actually a cat’ to a tune from Cats,” she reports. This, she says “falls a bit flat”. Does it? I haven’t seen it but it sounds brilliant.

Glen Wool’s work, on the other hand, I am very familiar with. I am sure that I would agree with the four-star score. In fact there’s little in Goodman’s conclusions to disagree with, just her working-out. For example, I just feel a little unnerved at Goodman’s NME-style hackese with added rhetorical questions: “My heart sinks. Wool is known to be a pretty funny comedian. What’s happened?” Goodman then merges with the entire audience to become one supreme conscience: “We’re all in hysterics”, “We love it”; “we’re all his favourite disciples”. Goodman, find yourself. And then get over yourself. 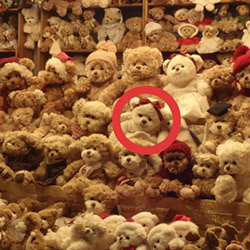