It is a curious thing that, while 95 per cent of stand-ups are on-message with the Guardian’s brand of sympathetic socialism, Brian Logan has little sympathy for stand-up.

His reviews are grumpy, condescending and keen to make it clear that it is HIS time everyone is wasting. Sometimes his opinions are so bombastic that they’re quite funny: “[Alfie Brown’s statement that] ‘democracy doesn’t work; we just get to choose our tyranny’ is an insult to people who live under tyrannies” he states, as if there’s no room for argument there, let alone comedy.

He opines that “much of what he says is flat-out reactionary”, concluding that it cannot therefore be funny. To view a performance through the myopia of personal politics is to look from the bottom of a well, and Logan’s well is poisoned by a miasma of self-satisfied liberal prejudice that at times becomes quite nauseating. It came to a head in his Guardian Stage piece of March 2014 in which, infuriated by Jack Whitehall’s easy relationship with his own privilege, he accused the comic of being an apologist for Cameron’s Britain.

On top of this, Logan’s writing is so thick that it occasionally defies navigation. Take this bit from his review of Tig Notaro: “The meaninglessness and fraudulence of the clown’s horn routine outweighed any amusement at Notaro’s milking of the audience’s indulgence”, he writes, like Samuel Pepys writing a particularly prolix note to his cheesemaker. It is ironic that Logan is complaining about Notaro overrunning: his reviews outstay their welcome by about 200 words.

It’s not all bad: he does at least laud the achievement of Adrienne Truscott in a review that – of all her reviews – gave the best flavour of a very unique performance. Yet you get the sense that Logan is more militant about getting behind the points Truscott was making than Truscott was in making them. Truscott may feel as many in history have felt when their cause is taken up by one-issue blowhard.

He is, in the most generous analysis, the sort of critic who is hoping that a show will agree with him, and invariably aggravated when it doesn’t. Which is, let’s face it, the very worst kind of critic.

Brian LoganWriting for The Guardian (Reviewed in 2014) 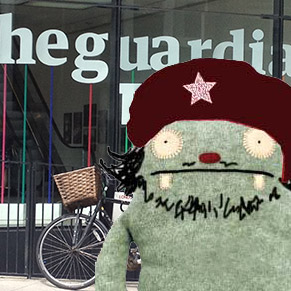