Bernard O’Leary is the main man at the Skinny, and it’s interesting to see how his approach differs from that of the other review grandees.

For example, while Chortlemeister Steve Bennett was furious with Ellis and Rose’s Jimmy Savile: The Punch and Judy Show – pretty much accusing the hapless duo of wasting his precious time ­- O’Leary just goes with it. “It’s not big or clever, but the title should cause you to expect neither,” he says, almost as if reviewers were capable of reason and perspective. While the Guardian’s Brian Logan wrote Adrienne Truscott a nerdy, wordy love letter that pretty much pledged to fight and die for her on the field of feminist glory, O’Leary’s piece was far shorter, far less absorbed with the politics, but no less certain in his conclusions: “If you missed this, you missed the Fringe”.

Like many opinion-makers in the reviewing game, though. O’Leary punishes anything unprepared or unrehearsed, giving both barrels in 2013 to Wayne Thallon (and, to some extent, everyone else on the Just the Tonic roster) and a sketch troupe who kept corpsing. As with the Savile episode, though, he is at least capable of being charmed. The cardboard puppets, he reports, were “pleasingly crap”.

His reviews never seem jaded, possibly because he doesn’t give himself the review workload of some of his peers. Thus he often seems to have put his notepad away and got into the spirit of the thing rather than obsessing over the mechanics – such as his glowing review for Rap Battles in which ingenues like me learn the word ‘slobberknocker’. If I ever get out of this packet and do comedy I will certainly use the ‘faux-naïve attack’ he observes in Truscott.

His reviews tend towards love and hate rather more than you might expect for someone of his maturity and bearing (established reviewers tend to score in the middle, and did so particularly in 2013). He writes far more on things he likes than those he doesn’t, meaning that his disses are at least over fairly quickly.

He is, perhaps, overgenerous with stars; his staff certainly seem to follow his lead on this. But with such considered reviews it’s impossible to say that he gives praise lightly.

Bernard O’LearyWriting for THE SKINNY (Reviewed in 2014) 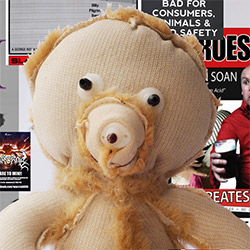