There comes a point in every Ben Venables review that you realise he’s gone off on one and left you scratching your head. His musings reach their most quixotic when he’s trying to describe what people look like: “His slight frame and birdie innocence recall the infant heron gulls that have divebombed Edinburgh gardens these last few weeks,” he says of Robin Grainger, one of Game of Loners. “It’s deceptive, though: look closely, and those may not be shoulder pads in his jacket but the erect posture of a confident man who commands the stage with unusual courtesy and respect to the audience: this bird has flown.” Flown where? What do shoulder pads have to do with looking like a bird? What the hell is going on?

“Imagine the Jolly Green Giant being so delighted with his maize harvest that he can’t help chuckling to himself. Now set that image in a bunker,” he tells us of Pierre Novellie. He avoids describing what the Kitten Killers look like, though, possibly because “the near burlesque performance” made him blush a bit. Or perhaps describing women is not gallant these days. I wouldn’t know. I’m a leopard. You all look like food to me.

Stick with Venables, though, and sentences gradually start to make sense. Of Novellie he explains: “His delivery is so down-to-earth he can speak about racism or politics and rouse less contention than when he explains why he hates maths.” Nice, and to the point. On the other hand, a description of all the reasons you might not like Kitten Killers rumbles on far too long. Especially when the last of these, “If male, attend only if you could tolerate being trapped on a hen party bus equipped with a humongous dressing-up box” does the job perfectly well by itself.

If Venables is going to indulge himself with flights of fancy, he must keep the reader’s confidence by getting the little things right. He says that the Kitten Killers are a ‘precocious’ all-female quartet. Not precocity in the style of Natalie Portman in Leon, surely? I mean, they’re all old enough to be in a ‘bawdy’ almost-burlesque Fringe show, right? I’m guessing (hoping) that Venables was casting about somewhere between promiscuous and outrageous and hooked this word by mistake.

Call me a big four-legged proselytising arse, but the frustrating thing is that Venables could be brilliant. It’s just that an ambitious, grandiloquent writing style – so effective when it works – has to be perfect, otherwise it overreaches and just sounds a bit corny. And it’s CORN in plain English, Venables. The Jolly Green Giant harvests corn. Not maize. Corn.

Ben VenablesWriting for THE SKINNY (Reviewed in 2014) 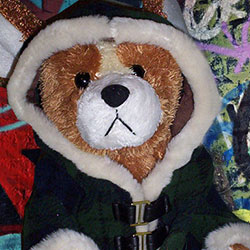