this is an article from 2018The Left Needs to Rediscover Reason

This article was first posted on Monday, August 20th, 2018 Filed by Martin Walker

Far-Right snowflakes need to be exposed to the sunlight of debate, not locked in the freezer says MARTIN WALKER

Scottish comedy fans who enjoy football will be familiar with BBC Radio Scotland’s Off the Ball. Its presenters, Scottish Sun journalist Tam Cowan and ex-NME editor Stuart Cosgrove, play the line between innuendo and filth, and have on occasion been accused of misogyny and homophobia. Despite this it’s the best comedy show on radio.

A couple of weeks ago, after he used a derogatory term for gays, I tweeted Cosgrove to politely point out that his language was “a bit off”. He quickly apologised, adding that he meant no offense. Apology accepted. The end. Except for what happened next.

I received, if not a torrent, then certainly a light barrage of anonymous tweets from self-proclaimed free-speech advocates telling me to “shut the f*ck up” or they would “rape my boyfriend’s gay bumwhole” [sic] and variations on this theme.

Aside from the obvious irony of free-speech advocates trying to silence those who disagree with them, these threats demonstrate that left-wing identitarians don’t hold the monopoly on snowflakery. I wasn’t calling for Off the Ball to be banned or for Cosgrove to be disciplined, or imprisoned, or even lightly spoken to by an overpaid executive. I was exercising my freedom to criticise his use of language.

Last issue, comedian Kate Smurthwaite detailed some of the threats she receives online almost daily, for being a woman with a strong opinion. In this information age, is free speech really going to be all about defending those who would happily silence others with threats and intimidation?

Of course abusive behaviour by idiots wasn’t born with the internet. In my teens, back in the 1980s, the National Front would attempt to march through my estate, demanding that my black and Asian neighbours “go home”. The counter demonstrations would always be bigger and the police would end up trying to protect the racists from the residents. My first political action, and my last violent act, was punching a Nazi in the face. I’m not proud of it; I abhor violence but it was self defence.

Despite my modest history of fighting racism I’ve been accused of being a member of the far Right, merely for stating that I’m a free-speech advocate. I simply don’t believe that the non-violent expression of racist, misogynist or anti-gay views should be unlawful.

I want my bigots where I can see them. I want to debate them openly, because I know for certain their attitudes are just plain wrong. If they start violently kicking off, as they did on a so-called free speech rally in London recently, then by all means chuck them in jail – but there are laws that cover violence already.

The world’s snowflake-in-chief, Donald Trump, has started to talk about extending US libel laws, potentially imprisoning anyone who tells the truth about him. Honestly, that man is so sensitive.
Unlike Trump, the Left has coherent arguments – about racism, sexism and homophobia – that are intelligent and evidence- based. It’s time that it regained the confidence to engage in these arguments, rather than retreating to safe spaces and no-platforming.

lmagine a free-speech utopia where a man says an offensive thing and then apologises, with nobody threatened with anything! It’s possible. 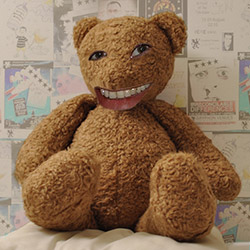