this is an article from 2018GAGGING ACTS

This article was first posted on Monday, August 20th, 2018 Filed by Mister Kipper

Blacklisting, censorship, no-platforming, hate-speech laws, the Communications Act, peer pressure: this is not an easy time to make unpopular opinions funny. FRINGEPIG speaks to four comedians who speak up for free speech.

F:Free speech in comedy seems to divide into two camps: those who say it is sacrosanct, and those who want to subject it to caveats such as ‘free speech doesn’t mean hate speech’. Are the second group not just trying to make us a better, fairer society?

GD: Liberty and equality are opposites. You can’t have both. So you can have freedom, or you can have ‘fairness’. Those that want to curb free speech do these things to achieve a kind of equality, but what we get instead is awful, authoritarian nonsense. The comedians I argue with on this want good things. But the society they’re trying to make is just fool’s gold.

AD: What’s so sad about it is that a lot of it IS well-intentioned. But many are reacting to a crisis that doesn’t exist. A lot of people in the UK think we live in a nation of racists; that Brexit is racist and that all Leave voters are racist. It’s a fantasy. It just isn’t true, and people only believe this because they live in a social media bubble where their own paranoia gets repeated back to them every day.

SK: There are a lot of good people I disagree with, yes. But you know what? They’re ridiculously selective. The Left is very hot on, say, Western women’s issues and that’s great. But when it comes to whether women here should be forced to wear the veil, there is nothing but tumbleweed from them. You can’t have good intentions but be a coward about the stuff that’s a bit too difficult.

ZL: People just don’t get free speech anymore. After the Charlie Hebdo attack we saw thousands on the street demonstrating for freedom of speech. The next week Marie Le Pen was due to speak at the London School of Economics and the place was mobbed by no-platformers. And I thought ‘I bet some of you were the same dicks waving pencils in the air a week ago’. You can’t pick and choose; you either agree with free speech or you don’t. 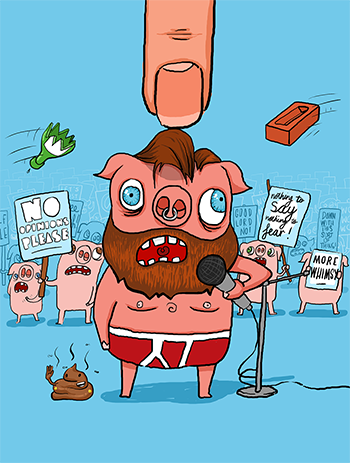 F: It seems that there are few loud voices in comedy standing up for free speech. Does it surprise you that so few speak out? Are they afraid of the Alt-Right tarnish?

AD: When Tom and I did the Jonathan Pie piece condemning the Mark Meechan verdict, it did surprise me how people reacted. I mean, it didn’t surprise us that they didn’t want to be seen defending him, particularly when he and Tommy Robinson became friends. I understand that. What I cannot comprehend is those who actively sided with the courts. When that piece went out we got a bit of protection for a couple of days because some big names – Gervais, Fry, Baddiel, Djalili – all supported us. The backlash came a couple of days later, led by Graham Linehan. He explicitly mentioned me and Tom, insinuating that we’re ‘Nazi apologists’. Of course we protested. But he’s not interested in debate. He just wants to send nasty tweets.

SK: After I wrote a piece in the Independent against that verdict, Linehan said about me: “These idiots don’t know how the Alt Right work”. Well, my family lives in Britain for one reason: there is no free speech in Iran. When my family got to Britain we were amazed – you can go to Speaker’s Corner, say whatever you like, and nobody kills you. Graham Linehan has no f*cking idea what that’s like; to leave your family and friends and roots behind for freedom. I’ve had a lot of sh*t from him. His beliefs are just childish and people like that employ the same playground bullying as the Alt Right.

ZL: Free speech has become a space the Right has moved into, but I think we take some responsibility for that. If we’re prissy about free speech it will be used against us. If we had shrugged off that whole thing like the nonsense it was, we wouldn’t have handed this to Tommy Robinson and his pricks.

GD: People who want to end free speech always fall back on the excuse of needing to contain the Alt Right. It’s a much smaller bogeyman than people think it is.

AD: Yes. People on the Left see the stuff online from trolls and ‘shit-posters’ and believe there’s a Nazi conspiracy going on. Well, there isn’t. I’ve met Meechan, I know shit-posters like him and I understand that world of trolling. It’s anti-authoritarian, and liberal elites claim the moral authority, so they’re easy to get a rise out of. When Hilary Clinton spoke out against Pepe the Frog, that was a massive victory for them. People had taken their nonsense seriously. And some of these people ARE really horrible, but it’s panic that feeds them.

ZL: I think people can’t help themselves, because offence is sought out now isn’t it? There’s a weird glee that people take in finding offence and applying it to themselves. I’ve had some truly horrible things said to me; really vile things. And I’ve been disappointed by them; angry, bored. But I can’t remember ever being ‘offended’. To be offended is to have no sense of humour about yourself and a totally disproportionate sense of yourself within society.

F: Most of us, I suspect, are closer on this than it seems. We all want to explore dark themes in jokes, but most of us also want others to be safe in the knowledge that it IS just a joke. Why is everything becoming so polarised?

SK: It has become very difficult. When people like Meechan have scumbags – and sorry but he IS a scumbag – like Tommy Robinson in their corner, it’s really tough to say “No, I KNOW it’s just horrible but he said it as a joke. He has done it in the context of a joke so we have to support that, if we’re comedians.” It’s that simple. Not support HIM – of course not. But support the principle. 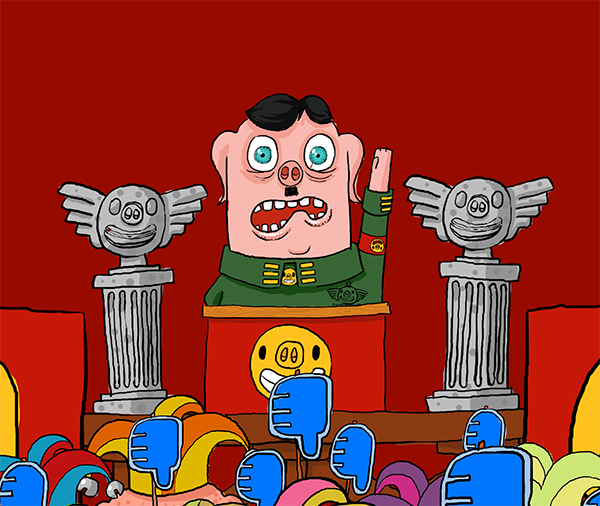 AD: It’s hard because you can’t have a reasonable discussion anymore. Stephen Fry appeared with Jordan Peterson in a Munk Debate on free speech. Now, Peterson is absolutely against identity politics and the Alt-Right is BUILT on identity politics. But the Left has said that Peterson is Alt-Right enough times to make it seem true, and to establish guilt by association. So now even Fry is tarnished. When people become frightened to associate with you, then your enemies have won. They have silenced their opposition.

ZL: I’ve seen it from the other side. I used to be an actor for a roleplay company that taught diversity training. I got £200 a day to pretend to be offended. But you can’t legislate against stupidity, can you? So diversity training is the most meaningless waste of time, because all you’re doing is telling people to hide their inner hatred. You’re not changing anyone’s core beliefs.

GD: The government tends to gives itself new powers and then, sooner or later, it has an effect that it didn’t foresee. The only surprise is that, between the Digital Communications Act 2003 and the Dankula thing, it took so long to happen.

AD: A lot of people want to expand terms like ‘fascism’ and ‘far Right’ to include everyone who disagrees with them. It’s ridiculous. The Sun isn’t far Right. The Daily Mail isn’t far Right. If you cannot make that distinction then you’re not politically literate. What the Left has done so successfully is redefine these terms.

SK: What frightens me is that we’ve allowed these bastards who ARE on the far Right to get a hold of free speech. They’ve made it impossible to stand up for free expression now without being part of their narrative. And there are real consequences to not toeing the liberal line on this. Because of my pug article a lot of comedians messaged me to tell me I was ‘dangerously off-message’. And those that agreed with me didn’t want the headache.

F: How much danger are we in, though, really? I mean, a lot of people say ‘This isn’t Burma’…

GD: The state is there to protect your life and property, not your feelings. So: slander, libel and the credible threat of violence – these are all real things that need laws. What’s dangerous is that we now have laws against ideas. Ideas aren’t dangerous in and of themselves, and don’t need laws forbidding them. Not even really awful ideas, because no vocal expression of an idea is as harmful as the crushing of that idea.

AD: Our freedoms are not fixed. We don’t have a written constitution. I showed the Nazi pug to a live audience, to talk about it. A lawyer told me not to; that I could be charged. But I know the police won’t come after me or Tom because we’re a bit too high profile. They will go after some working-class shitposter in Scotland. Comedians here ought to have a vested interest in someone in their own nation facing jail for a joke, because it sets a dangerous cultural precedent in which people will now self-censor.

SK: It’s easy to ignore when it’s just dickheads getting in trouble. But in the UK free speech is only going to be tested when we liberals, who have the power, find our sensibilities offended. In Iran or Burma it’s people like us, saying the things that WE believe to be true, that are testing the authorities. And I want to live in a country where authority can be tested. 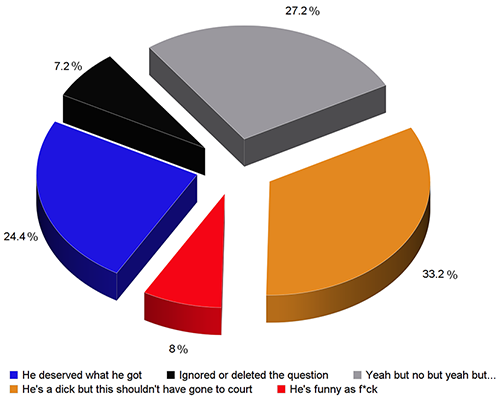 The ‘Count Dankula’ case in April brought differing opinions on free speech into stark relief. We asked 250 comedians at this year’s Fringe how they felt about it. Just 8 per cent thought the joke was funny and entirely valid (RED), versus 24.4 per cent who believe Meechan got what he deserved (BLUE). The largest group (33.2 per cent, ORANGE) felt that the joke was wrong but that it either should not have been a legal matter or that the outcome was unjust. The most surprising thing – or perhaps not in this keep-your-head-down climate – is that more than a third of respondents either danced around the question with no clear answer (GREY) or simply refused to answer it at all (BLACK). 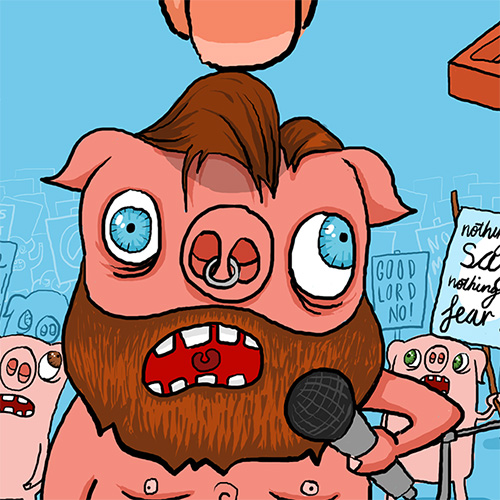