this is an article from 2014Solitude is not an option

This article was first posted on Sunday, July 20th, 2014 Filed by Mister Kipper

Fringepig caught up with Louis the Self-Destructive Bear, star of about a trillion free Fringe shows, at a café in Southeast London. We asked him how he feels about his many reviews. 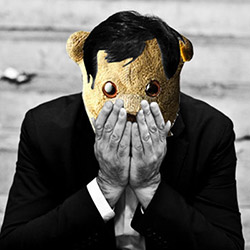 “EVERYTHING I’ve ever learned is from a reviewer. I don’t trust anyone’s opinion unless they put it in print for other people to read. Unless they have an opinion that they’ve stated publicly, 100 per cent on the record, then it’s not a real opinion of your work.

“I CAN’T trust anyone’s opinion – the audience after the show, my peers, promoters, ANYONE – because they lie. There’s such a complex series of social barriers to telling anyone the truth in this country that I know I’ll only hear something real if I happen to hear someone else gossiping about me – and in essence that’s what a review is.

“OF COURSE it has an agenda. Of course they may be saying ‘Louis, what a dickhead. What an annoying samey American’. But I’ll still learn from that. I’ll learn that they maybe hate Americans, or Jews, and I can use that. That goes into my next show.

“I DON’T get this stuff about reviewers being just kids, or just students. They’re the people I need my feedback from because they’re my target audience. They’re the people who go to comedy clubs now and they’re the ones who in ten years are going to be buying my tickets. If I have another ten years. Five years. They’ll be buying my tickets in five years. To be honest I’m still on my first ten-year plan from 20 years ago. I thought I’d be famous by now.

“OKAY, so sometimes I’m not interested in what 20-year-olds have to say, but they’re nice to hang out with. You need people. I need people. And they’re the people who go to shows and laugh the loudest. And everything I’ve learned as a comedian I’ve learned from them. I went back to my reviews five, four, three years ago. And they all said the same thing, but in a different order: started brilliant, ended horribly. Started terribly, ended fantastic. Started mixed, went brilliant, ended horribly. At some point in every show something horrible has happened and something brilliant has happened, and I wouldn’t have finally learned that unless I read the reviews.

“DO I need reviewers to point out my own natural Tourette’s? Well yes because I didn’t know it was natural. I thought I was a failure. But looking at the run of stuff in print I can see that it was my choice. Every time I threw it away, that was me deciding to do that. It’s difficult to see that if you have my background. You need it in black and white.

“I REALLY can’t help it. The idea that I need every possible emotion to be crammed into the shortest possible time is something I learned from my mother, who was a certified manic depressive, bipolar everything. She was that way and I’m that way too. I need every emotion within 20 minutes otherwise how boring is that? Elation, shame, triumph… and failure. Because that was my childhood: my mother giggling and laughing and then crying the next minute. So when I HEAR someone giggling and laughing I think ‘Okay, they’re gonna start crying any minute. This good feeling, this nice situation, is going to come to an end’. So I might as well bring it on myself, and then I feel like at least I’m in control of that. I’ve got control over the chaos around me because I caused it. Whereas, growing up, I was the victim of chaos.

“BUT now I find that what I give off is this aura where people just think to themselves: “Oh my God, this guy is about to say something that’s gonna embarrass me, or humiliate me, or humiliate himself and make me feel bad. So I just get in there and make it happen, because otherwise the tension is appalling and it’s gonna happen anyway, right?

“SO when you set up a website to make fun of kids who are reviewing, that’s like setting up a website to make fun of open mikers. You know, they’re brand new, these writers. And they’re trying for their own outlet of artistic expression, because critique is a valid thing. I’m not just saying that to get on these people’s good side, because I don’t believe anyone is actually going to read this.

“HAVING said all that, if I sensed that Fringepig was in essence something that favoured reviewers, or was on their side, then I would have come right out and told you what low-life scum they are. But that’s just me being me.”

You can see this bear at the Bunka Room, Heroes@The Hive, Niddry Street, Edinburgh from August 1-25 at 7:45 every evening. £5 reserved, or pay what you like.

Previous ArticleDeath by 1000 Cunts
Next ArticleReviewing 101, with Professors Bob and Jägermeister