this is an article from 2014Reviewing 101, with Professors Bob and Jägermeister

This article was first posted on Wednesday, July 23rd, 2014 Filed by Mister Kipper 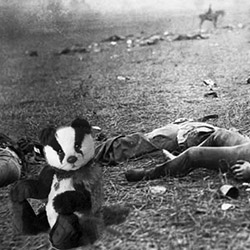 “Last year at the Fringe –  I believe it was the opening week – I had dropped in on my owner’s Midnight Mayhem show because I was living in a cupboard upstairs and I didn’t like the look of the weather. I had promised myself that I wouldn’t go if I could help it, because I hate to see Robert in that state.

He only pretends to be a boorish drunken ogre, you know. With me he is quiet and thoughtful, and speaks in epigrams like a Shaolin Master, or Mister Miyage. In fact he once caught a fly in a pair of chopsticks just like Mister Miyage. Although I remember the air was so thick with flies at the time I suppose it was sort of a statistical certainty. He had no business eating that thing at all, really. It had been there for days.

“Anyway, the show had just begun and I noticed that there was a child sat in the front row. Robert’s show is not really suitable for children, so I felt rather concerned for his sensibilities. But then Robert noticed that the young lad had a lanyard around his neck. He picked him out, told him that his accoutrement was worse than a heckle and confiscated it. After some interrogation the poor whelp admitted that he wrote for Three Weeks.

“So we all had a good chuckle at his expense. But then, demonstrating that contrarian nature that makes Robert an unpredictable performer, a frustrating lover and a terrifying drugtaker, he asked someone who was laughing at this poor whippersnapper how many fringe festivals HE had been to before: it turned out that this was also his first. In fact, most of the people in the room were Fringe virgins. So Robert told them: “Behold the reviewer. Look upon his face, each of you, for I say unto you that he is your peer. Is his opinion worth less than that of the jaded festival Pharisee; one of those we hold in high esteem? I say unto you, that those of the tribes of Bennett and Dessau and Corpse Dick have seen so much comedy in their years that they can divine not the wheat from the chaff. They see not what is holy. Or funny.”

“All this was a bit of a shock, of course, as Robert doesn’t usually talk like King-James Version Jesus unless we’re doing cosplay. Anyway, he decided to turn the show into a reviewer academy for the benefit of this young man. We had a module on comedians that our new friend had, of course, never heard of and he bade the whole room to do Tommy Cooper impressions before declaiming he Morecambe and Wise Andre Preview sketch.

“It was a very lovely night, and at 3am Robert said to the Reviewer, “Yea, now shall ye follow me” which was a fancy way of obliging him to help tidy up. He finally left the premises at 6am wearing only his pants and socks, his pale skin imprinted from ankle to forehead with Robert’s venue stamp and carrying his clothes. He asked for his Lanyard back but Robert told him he had to come back for it the next day and pass a test based on his impromptu reviewer’s course.

“He duly returned about noon and, despite being worse for wear, sat the test. He scored 83%.

“Robert seemed quite certain that this one, at least, would turn into one of the reviewers we can all count on.”

*This reviewer is, in fact, reviewed here