This article was first posted on Thursday, July 3rd, 2014 Filed by Mister Kipper 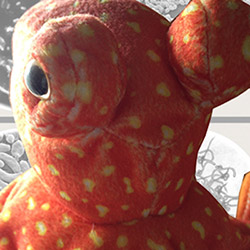 This website is the very last thing I wanted to happen.

Exactly five years ago today I felt myself amused, in a grim way, by Metro’s opinion on the teacher who tried to beat a student to death in Mansfield. It said that the attack was “especially surprising” because the website ratemyteacher.co.uk had given this particular teacher outstanding reviews.

This is the view many comics take these days: good review, so no beef. No need to batter Kate Copstick to death with a dumbbell.

As a teacher you should be able to go to work, teach stuff, dole out some thick ears and fuck off home. You shouldn’t have to worry about what the snivelling little pusmonkeys are writing about when they get home to their dadless roachtraps. The police on Fifties cop shows always complained that “Everyone’s a comedian”. These days everyone is a fucking reviewer. So if teachers can’t escape child critics, what hope do comedians have? What consideration should comedians even expect?

The process of turning audiences into juries began 11 years ago when edfringe.com let the public pour invective over everything they had seen on the website. Very quickly it became clear that between 70 and 80 per cent of comments were spleen-vents, and most of the positive comments were written by the acts themselves. This is what we do now, as a society: we vent about being let down by life. We live in a world of perpetual disappointment and our sense of entitlement is boundless. I mean, go to Pirate Bay (if you’ve got the technology to get around your ISP). Read the comments. This is a site where you can steal software worth thousands of pounds in a couple of hours, because someone has done the hard work for you. So you might expect the comments to say things like “Thank you so very much for aiding me in this crime, you’ve saved me £700!” or “as one criminal to another, my utmost gratitude”. But no. Line after line of “MENUS DON’T WORK U FUCKIN JEW” and “This is NOT the expanded version goddam Russian homo”. (I haven’t cherry picked. These were the first two I looked at. And I don’t think criminals are any less gracious than the rest of us).

And who goes onto edfringe.com, a website that, frankly, should also be blocked by our Government. Does ANYONE genuinely go there to say that a little-known free show had unexpectedly brightened their day? No. Unless they’re mad. Because normal people who’ve had a good experience tend to just get on with their lives. They EXPECTED it to be good. Be grateful that you escaped without comment. The degree to which one must be stimulated into praise is these days so much greater than that required to make us rant that we didn’t get our due. Of course, anyone who DOES get a good write-up on edfringe.com can’t put it on their posters anyway, because unsanctioned views from some random person are worthless. So why bother? Because the Fringe Society says that the opinions of “people” are important. These days I tend to agree with Superhans in Peep Show: “People like Coldplay and voted for Hitler. You can’t trust people”.

Well, maybe you can trust people a bit. But if there’s one group of people you don’t want to trust QUITE so much, it’s the people who want to assess the creative work of other people for a living. And even-less trustworthy than those people are the people who want to assess the creative work of other people NOT EVEN to make a living but just because they need something – anything – on their indifferent curriculum vitae. And this latter group, the people who have not yet made friends in the world; who don’t yet know the value of forging relationships; who have been told by the media in general that they can do anything, but told by every specific media outlet that they should go away please…  they turn in desperate, seething hordes to the Fringe freesheets, baying like hungry dogs for the chance to get their teeth into something. They really need this. For their CV. In the hope of getting an internship on the Guardian one day, they want to have an opinion all over your work.

For almost a month they will walk in off the street, stare at your art for as long as it takes the cortex beneath their spongy fontanel to register some sort of primitive electrical stimulus, and then discharge their vile goo all over you. And I don’t care whether they want to give you five stars or none. It doesn’t matter. The opinion of someone who has not lived life; who has never felt real fear, real loss, real anguish, real fucking disappointment – the sort of disappointment we feel when we spend £10,000 to stand in a hot box for the bemusement of pondlife – simply has no opinion worth considering. I’m sorry, but NOBODY under 26 should be allowed to write a review unless they can prove that their life has been an unmitigated fucking tragedy and thus are old beyond their years; that they have been chastened as we are chastened, every fucking day in that overblown Gothic shithole called Edinburgh, that upside-down shit surprise of a town built by a Medieval lunatic just under the outflow of God’s toilet.

Because every time we oil the cocks of these odious gits; every time we stick five of their stars on a poster from Fringemonkey, Fringepimple, Broadway Flatus or Wee Geeks, we increase the power of their ignorance and diminish the value of our art. Think of any genius; anyone you admire from any field who had to work against ignorance and disapproval to get their ideas known. Darwin, Mozart, Capote… Lenny Bruce. Imagine how much less you would think of them if they had actively courted the approval of the sort of pigshit nobodies we send our PR bumph to. “Dear Science Biscuit, please oh please send a 15 year old girl to sit looking bored while squeezing her pimples at the back of my presentation to the Linaean Society. It’s gonna be AMAZING! Love your work, Charles D. PS: Free badges!”

I have it on some authority that the average Ed freesheet reviewer is 21 years old. When I was 21 I knew: How to piss people off, fuck anything that didn’t vomit at the prospect, take every drug offered to me, drink myself into a coma, do as little work as possible, throw bottles at people in the street, hurt anyone who cared about me and, vitally, how to do all this while feeling VERY VERY talented and self-important. I thought my opinions were THE ABSOLUTE TRUTH. Thankfully, though, nobody offered the 21-year-old me the chance to pass judgment on the careers of seasoned professionals who had invested months of work and thousands of hard-earned pounds into fragile Edinburgh campaigns.

Copstick may be an evil old cow, but at least she has earned the right to her sometimes brutal opinions. I might even say the same of Steve Bennett if he wasn’t sometimes prone to farming out his work to children, whose dribbled opinions hang around on the web forever like evil pasta pictures. What has the world come to that the perceived worth – indeed, the self-worth – of wonderful, professional people is at the mercy of people who don’t even know what they’re doing with their own lives yet?

But please believe me when I say I do not blame the children who write the reviews. Those poor pustulent dogs are nothing but curs whipped by circumstance; they want to write in an age when print is dying; to be heard in a world full of noise; to find a job, eventually, when there just isn’t any. No, it’s not their fault.

This is all our fault. We did this. Comedians did this. The wanky mime artists and the students doing Shakespeare take some of the blame too, but mostly it’s the fucking comedians. We were so hungry for approval we built ourselves a bonfire of pulp babble, a rack of stars.

Carry on, all of you, sticking stars on your poster from Fringecunt. Stapling hyperbolic oohs and aahs to your fliers from Fringetwat. But remember, an angel dies every time you do that. A fucking ANGEL.

And so to Fringe Pig. I fail to see how adding one more layer of reviewing is going to lift us out of this morass. Giving stars to the star-children? Granting them blessed recognition, that’s all you’re doing. And that’s exactly what those shits want.