this is an article from 2015Lewis Porteous: The Poem

This article was first posted on Tuesday, August 25th, 2015 Filed by Editor

Psychologists tell us that having a meaningful job you enjoy is the best way to stave off dark thoughts, and seasoned Fringe reviewer Lewis Porteous has that in spades. 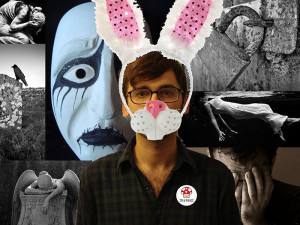 Why, only this Fringe he referred to comedians en masse as “an oppressive, self-centred, sporadically amusing establishment”. So far this Fringe he has used the words ‘bored’, ‘tedium’, ‘depressing’, ‘apathy’ ‘pointless’ and ‘meaningless universe’ ONLY 543 times in all , a 20 per cent reduction on last year and probably below the average for Fest reviewers. No doubt at all that Mr Porteous is one of the busiest and merriest reviewers on the Fringe and an absolute delight to have sitting right in front of you when you’re trying to make dehydrated people happy.

But did you know there’s a darker side to our favourite Fest hack? We cut all his reviews into bits (as many have done before), said a prayer to Absolutely Nothing Because Nothing Actually Exists In An Absurdist Universe You Idiot, and let the bits fall as meaninglessly and boringly and tediously as they liked. As we watched the pieces fluttering earthwards like brief cherry blossom on the last Spring morning of a dying child, we felt angry that it wasn’t all over yet. But then it was. And how!

What formed on the floor shocked us all: a beautiful poem comprised entirely from lines of Lewis Porteous reviews. This will rival T S Eliot’s The Waste Land for its sense of beautiful, bleak yearning. Enjoy!

“I promise, you will never understand.”

On some otherwise unused wasteland

This feels like a parody, but it’s hard to say

Of what: The material he peddles is generally

Lightweight. And the work is haunted

By its own sense of possibility,

And we find ourselves disappointed

Tedious in the extreme

A delirious swirl of drunken onomatopoeia

However pretentious this line of thought seems

No sense of pay-off to the maddening tedium:

It would be valid to complain

Expressions justify use of a visual medium

This is dull, lifeless comedy, as practised by a man

We sneer at those less cosmopolitan:

Stops short of being a must-see

“Not all black people are the same”

But the expressions of boredom that greet his polemic

Feel a collective sense of shame

A blubbering infant is unsettling in the faces

The faithful laugh in all the right places

Underpants which cling so we see

The outline of his penis; loses narrative focus

Cancer will affect one in two of us

Then comes a lull and we find ourselves bored

A palpable tension hangs over the queue

There are surprises, callbacks and party games

But there’s no depth to its characters beyond their names

This feels like a parody, but it’s hard to say

It’s too bad he seems to lack

The casual slut-shaming that twice creeps its way

Into what could be considered the realm of the hack

The bearded berk muddles his intentions

Outside the pie factory in which he works.

As a group of teens gather in detention

Any sense of gravitas thwarted

And we’re back where we started. 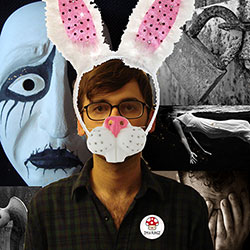