My colleague Mr Rumania has always been rather dismissive of Fest reviewers, saying that they have a policy of under-rating good shows and judging everything from behind a barricade of preconceptions. Even the balanced Mr Kipper calls them “haughty”. I wondered whether it was just that Fest tries to be more honest, and sets realistic expectations for the shows it reviews. It’s easy to give five stars to everything just to chase goodwill and advertising cash, after all.

I was eager to prove them wrong with a close study of Lewis Porteous, someone I knew to be an erudite and considered writer. And so he is proving this year, quick out of the traps with four mostly well-written reviews. Of Al Lubel he writes “After an hour of false starts, the delight that the man takes in deflating audiences so that he can go through the chore of seducing them all over again becomes apparent.” This is Lubel in a nutshell, and encapsulates Porteous’s skill for getting his point across succinctly. Three paragraphs of Porteous convey far more of the feel of a show than an essay by a lesser reviewer. Porteous is a master of the feel. And this is even more of an achievement when you consider that his first paragraph is usually nothing but throat-clearing and woolly overview.

Sadly, like his colleagues, Porteous – after a few lovely phrases and acute observations – very soon crosses his arms and expels air through his nose. Abigoliah Schamaun’s “exploits simply aren’t as interesting as she continues to think”, he says, opining that the comic seems to think she’s still in shockable small-town Ohio rather than “the world’s largest arts festival”. Porteous doesn’t allow the fact that this is Schamaun’s third Fringe show to impinge upon this assessment.

Similarly, describing Al Lubel as a ‘relatively obscure comedian’ is a statement that is, in itself, relative – he’s known to the likes of Jerry Seinfeld and Sarah Silverman. Obscure to the British masses, maybe, but we expect a reviewer to know more than us and to talk with wisdom, even – dare I say – enthusiasm. Porteous gives the impression of a reviewer who is great at sketching what appeared in front of him but has neither the interest nor the conviction to broaden his research.

I DO NOT share my colleague’s belief that Fest reviewers hold back stars so that they can stick them “up each others’ arses”. Yet I can find no compelling reason why Lubel, if he truly is a “purist comedy hero” who “absolutely gets the job done” is given just three shitty stars to accommodate.

Porteous gets far more excited about the “lascivious Thatcher send-up” Margaret Thatcher Queen of Soho,where, like his review of the play Black Faggot, he seems to celebrate the politics and the point being made. Which is all very good. But it sometimes feels like Porteous just wants an easy ride, with shows that are easy on his funny bone and complimentary to his beliefs.

Lewis PorteousWriting for FEST (Reviewed in 2014) 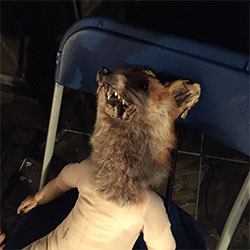