this is an article from 2015Are We Total Dicks About Spellign?

This article was first posted on Wednesday, August 19th, 2015 Filed by Editor 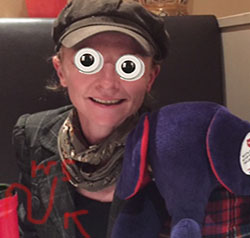 In order to laugh at others, one must first be able to laugh at oneself. And we do that here at FringePig. We find each other very amusing. And cuddly.

Folly is a part of the human condition, and the stuffed toy condition too. We are all prone to errors. So when a reader pointed out that we had spelled ‘literacy’ ‘iteracy’ while questioning a magazine’s basic literacy, you can imagine how funny we found it. The stuffed toy in question laughed all the way through his brutal flogging. We love irony.

We really are quite rubbish sometimes. for a start, we started out as ‘Fringepig’, even sneering at Three Weeks for calling itself ThreeWeeks as if it was an internet startup in the 1990s. Then we started to feel jealous of ThreeWeeks and started calling ourselves FringePig. I mean, come on! Americans spell lots of words wrong but at least they’re consistent about it.

However, there is a point to be made here because we get dozens of emails every day that say something along the lines of “You stupid stuffed cunts have a go at reviewers for their spelling but just LOOK at this moronic error you great sawdust-headed dicks!”

Well, there is only one way to respond to such missives: to say thank you, make the correction and resolve to try a bit harder.

The fact is, typographic errors are not cardinal sins and they don’t attract our attention to any great extent. We don’t generally jump on a reviewer unless they are too numerous to ignore. We are more concerned with the overall grammar and clarity. Even when we tut about it we try to remember that it is probably more the fault of the publication itself for not hiring a decent sub-editor: we know all too well that a lot of these reviews are pecked out late at night when your eyes hurt from staring at a cold, phosphorescent screen. If we get the gist of a sentence we, as a rule, let it go.

We are a bit harder on Mister Chortle, even though we are very fond of him, because he kind of IS the publication itself. We suspect he has bags of money and a castle by now and yet he STILL won’t hire a subeditor. And he must know the value of a subeditor because he IS a subeditor, on one of those newspapers comedians take the piss out of. The death of newsprint means that there are thousands of subeditors out of work right now. They’ll work for sandwiches.

At one point, in an attempt to square science and spirituality, Hamdi asserts in the conservation of energy basically means reincarnation – a statement that will have rationalists bristling. Elsewhere he suggests, not unreasonably, that we should make half the bankers and chief executives, scoring some easy points for being great feminist. But his follow-on assumption that this will mean and end to boom-bust economics (why?) and ‘cuddles’ is trite in the extreme.

Ms Plubbe sent in the following:

Steve is sayin that HAmdi is sayign that if we force bankers be more feminist then they will stop being gredy and then the world will be hapy and more fare.

This won for its unique, out-the-box take on the issue, despite the spelling being so terrible that it actually made a couple of us sick. We were prepared to overlook it. Also it was the only reply we got. So Ms Plubbe won lunch with Mister Kipper.

Ms Plubbe opted to go with Mister Kipper to the Red Fort Indian Restaurant. She did a BYOG (bring your own gin) and after an hour and a half of complaining about the festival crowds and the irregularity of Edinburgh’s bus service she passed peacefully into a korma.

Previous ArticleWoof! I Met the Media!
Next ArticleMy Darkest Hour