this is an article from 2015Woof! I Met the Media!

This article was first posted on Monday, August 10th, 2015 Filed by Editor 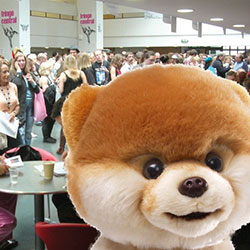 As I stood in line, sniffing the bins and trying not to cock my leg at the tables, I waited for my moment in the sun (although sadly The Sun weren’t here this year, so the person standing around in only her pants must have been slightly disappointed). This always feels like the cruellest of speed dating events. Five hundred suitors for eight or nine queen bees. Could this one be “the one”?

At least, unlike my colleague, I ended up queuing with a nice bunch of people and thus wasn’t reduced to thoughts of violence about improvisers and university drama clubs, merely advanced catatonia as the queue slowly, slowly inched forward. For some people, the queue is a good way to meet people, to share and have validated your anxieties and hopes for the coming month; to make connections with other performers.

It’s a lot like university registration in that regard, where the solidarity of queuing gives you a starting point for conversation, but as a grizzled veteran (20 years since my first show) I just drifted off, trying to quell my frustration, and work out how best to be “on” when my time comes.

Some organisations do Meet The Media very well. Broadway Baby had separate queues for comedy and theatre this year, and a very proactive chap who had a tablet to see which shows were already booked in for a review, so that those people didn’t need to queue. This meant their line moved really quickly, to the point where he was going round the other queues to check people before they even went to see him.

Three Weeks, despite having one of the longest queues, had three different people listening to pitches, so their line moved at a fair lick, and FringeReview and Fest had things kept simple by their somewhat smaller queues, although I must dock a star from Fest for not showing up until 2pm.

The villain of the piece this year was The List who, despite a really long queue and two members of staff, were only listening to one pitch at a time and seemed to be giving everyone 10 minutes. It took me well over an hour to get to the front of their queue, by which time my colleague had done three others. Maybe they were just being overly polite and not telling people to shut up and move on, or maybe they were just incompetent, but they were certainly the only people actually giving out paperwork to tell you how to make your listing on their site better (and therefore drive traffic to their site to increase their ad revenue).

After all that I didn’t have the time or, by then,the inclination to talk to FringeGuru or The Scotsman, although at least if you were in The Scotsman queue you got to look down over the balcony on to all the other queues. The BBC line, meanwhile, was so vast it doubled back upon itself as it snaked around the building.

The whole thing is a bit of a meat market at the best of times; performers trying to condense the thing they’ve spent the last year on into 30-second elevator pitches, but the room at Fringe Central in Appleton Tower has never been entirely suitable for it. As numbers continue to increase, it becomes less usable by the year.

Given that we know from Fringe Society accounts that they pay Edinburgh University more than £20,000 for the use of their buildings for the month, surely a better, bigger space could be found for this event?

Previous ArticleWin Lunch With Mister Kipper!
Next ArticleAre We Total Dicks About Spellign?