This article was first posted on Monday, August 3rd, 2015 Filed by Mister Kipper 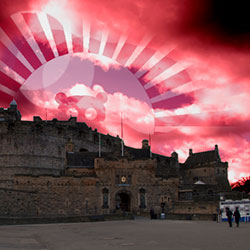 Greetings, fans of the hallowed art of comedy reviewer-review. You find us geared up and ready for another fantastic year.

Last year we debuted with 207 reviewers, and this year we hope to add at least 50 more if there’s sufficient fresh meat in the critic machine. If not we’ll have to update some old favourites. If, that is, they’ve shown any signs of personal or professional growth.

There have been some staff changes here at Fringepig. Some of you may have heard the tragic news about Vince Guttering. We would like to say that he lost the fight against his own demons but Vince was a rationalist who was zealous, nay Cromwellian, in his insistence on non-religious and non-mythical verbiage.

So we must be content to say that Vince’s chemical imbalance, in connexion to the life choices he probably had no free will in making, became such that his many electrons aligned in a formation conducive to suicide.

He is not watching over us, he does not live on through his work, he does not still exist in the memories of those who loved him and his body is doing nothing but feed the moths. Fuck me, it’s a comfortless thing, rationalism. What do these people do at each others’ funerals? Just shrug and mutter some Stephen Fryisms about theodicy? No wonder Tim Minchin is so bloody cross all the time.

Needless to say we hold Vince’s memory dear and hope to uphold the standards of journalism which, because of the drink, he never could. We have built a shrine to him in the office despite – in fact, BECAUSE– it would have been the last thing he wanted.

Hoots MacUzi also left us following a row about the referendum (don’t ask. We’re just glad it’s behind us. Except it fucking isn’t, is it? The referendum, I mean? It’s going to go on forever.) And Michaela Plaidface has gone home to Aberdeen to have a flump. Or it might be a gonk. She doesn’t want to know until it pops out of her. I’m keeping her job open for her next year. No, I’m not giving her maternity pay. I’m running a business here, not a crèche. Anyway we wish them all the best.

We expect… in fact, we KNOW… that each of these fellows will build new pillars upon the pantheon of Fringe journalism.

Judging by last year’s standards it can’t get very much worse!