this is an article from 2015It’s the Ham Fist Award!

This article was first posted on Monday, August 3rd, 2015 Filed by Mister Kipper 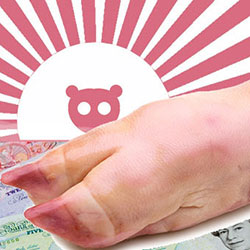 A new prize is being offered by Fringepig.

The prize was made possible by a gift from a Fringepig fan; a well-known industry personality who wishes to remain anonymous.

The prize of £200, called the Ham Fist, will go to the most critically misunderstood show of the Fringe. Previous winners might have been Marcel Lucont, who last year had a teenage reviewer calling him arrogant and misogynist, or Phil Ellis, whose 2013 show had a reviewer complaining that everything in the show went wrong.

Another £50, possibly nailed to a pig’s trotter (actually no, we’ll keep it vegan) will go to the writer of the review, in the hope that he or she will buy a couple of books and learn about whatever it is that they failed to grasp.

The prize will be awarded from a shortlist close to the end of the Fringe on board Bob’s Blundabus. We hope you’ll all watch for announcements and join us there. You can follow our adventures throughout the Fringe on Twitter @fringepig.