Andrew Currums is a difficult reviewer to assess. While a great many of his conclusions seem wrong to anyone of normal intelligence, they do follow an internal logic that makes sense in itself.

For instance, he complains that Vladimir McTavish and Keir McAllister’s Look At The State Of Scotland (I’m going back to 2012 here because his output is not prodigious) didn’t give the insight he was promised and instead the duo “tread safe and predictable ground”.

Part of me wants to ask how many other shows that year, or in 2013 – or, I’ll wager, this year – bothered with politics at all, and that surely an attempt is worth applauding? But this is all beside the point. Currums has a right to expect more than was offered.

And what is this so-called depth Currums is seeking? Although he uses a lot of synonyms: ‘flabby’, ‘no strength’, ‘not sturdy’, he at no point explains himself with any clarity. Yet I don’t at any point doubt that Currums knows what he means, nor that he’s given it plenty of thought.

On the whole, I would let Currums off but for a cardinal sin committed in 2012. That year he assessed Chris McCausland at a preview in Southeast London, the review titled ‘Chris McCausland AND Liam Mullone’.

Mullone is not reviewed or mentioned despite the fact that, bizarrely, his picture is used to illustrate the piece. In this way Currums gives the distinct impression that he has even less idea than a blind comedian of who or what he is looking at, but this isn’t the problem.

The problem is that Currums regurgitated his rather dismissive writeup of McCausland’s preview as a review of the comic at the Fringe proper, pretending to have seen him in his venue.

Clearly there is a principle at stake here; if reviewers are allowed to copy and paste writeups of shows they saw as a work in progress, pretending they are bona fide Fringe reviews, then they are doing a severe disservice to both the public and the comedian in question. At least Chortle makes it clear when it pre-assesses Fringe shows by releasing them on the first day of the Fringe.

These are usually shows that have made it known that they are happy to be judged. Publishing McCausland’s review on August 7th as if the reviewer had turned up at his venue and seen a Fringe-ready show in its Edinburgh environment is nothing but a callous, lazy fraud. 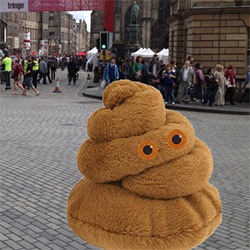