It is difficult to sum up in mere words quite what a disgrace Andrea Valentino is to the already besmirched art of reviewing, nor what divine relief his being eaten by an ebola-like virus would be to all future Fringes. Normally we are content when a bad reviewer just stops reviewing; in Valentino’s case we would want evidence that his hands had been removed, sealed in concrete and dropped overboard above the Marianas Trench. For the love of all that’s holy he must never write again.

As an easy starting point there’s his review of Ellis and Rose’s Jimmy Savile: The Punch and Judy Show. Now, he wouldn’t be going out on a limb to say it was amateur, and he wouldn’t be alone in not liking it. But instead of saying things Valentino subjects us to a turgid, infantile short story in which he imagines the two protagonists coming up with the show’s concept in a pub. He does this for 500 excruciating words like a 12-year-old writing for a school newspaper at a special school for the overbearingly cuntish. He simply doesn’t get bored of it. He actually thinks he’s writing entertainment.

Even when he likes something he ruins it. Of Josh Widdecombe’s airy material he approvingly says “Give me toast and passport photos over Iraq and bankers any day,” which is equivalent to him saying “I like this because I’m thick”. He prefaces Neil Delamere’s review with a torrent of pointless parawank about Ireland and its comedy heritage, as if Valentino has studied the subject for even five fucking minutes.

But no critique of the reviewing abyss that is Andrea Valentino would be complete without a look at his take on A Young Man Dressed As a Gorilla Dressed As an Old Man Sits Rocking in a Rocking Chair for Fifty-Six Minutes and Then Leaves, the cult event that happens only once each year.

Forget for a second the futility inherent in reviewing something that the reader can no longer see. Forget the fact that this is a show that is in every sense unreviewable; loved for its sheer pointlessness. Forget that a person would have to be a foetid, scabrous penis to even take out a notepad and attempt to apply the framework of content, presentation, staging and performance to something so entirely Fringe; something that has no message and no meaning other than the stated black and white fact that it is A Young Man Dressed As a Gorilla Dressed As an Old Man, who, as you remember, Sits Rocking in a Rocking Chair for Fifty-Six Minutes and Then Leaves. Forget all that.

Concentrate only on the fact that Valentino tops and tails this pointless attack with some impenetrable arsewipe about Scientology and then gives it one star. Perhaps he was comparing the devotion of the fans of this show to Scientology, and saying that’s bad. Perhaps he was saying he didn’t get it, like Scientology, and that’s bad. It doesn’t really matter because, by now, all we can imagine is a foetid, scabrous penis writing a review by spunking words into a dying leper’s eye and then chuckling about them. I repeat: HE MUST NEVER WRITE AGAIN.

Oh, and PS: Andrea writes of a show called Om Nom Nominous that “Om Nom Nominous lures in punters with a ridiculous name”. Your name is ANDREA, mate. Have a word with yourself. 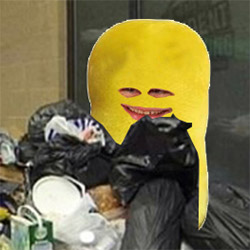