Jonny Ensall offers not so much a critique of what he sees as a contemplation.

Over 500 words or more he explores not just the when and the where of a show, but the why, the physics and the metaphysics.

Not that there is anything vague about his reviews: from the very outset their opinion is very clear, and given a sense of immediacy by his strange, but effective, habit of writing in the present tense. “This is painful. Daniel Simonsen is deliberately trying to sabotage his own show,” he begins his review of 2012’s Scandinavian award-winner.

Whether or not you agree with Ensall; whether or not you’re interested in the act he’s discussing, you are compelled to read to the end after glancing at the first sentence. You want to read his reviews as a piece of writing rather than just as the disposable opinion of a stranger in a crowd. This is very rare indeed.

What is also surprising – and only possible with such a generous word allowance – is the neat circularity of his arguments. Thus, the review will invariably conclude with something that happened in paragraph three.

With Andrew Lawrence – after discussing his “Beckettian spirals of entropic despondency” – Ensall tells us that he “is offering nothing other than an evening of professional competence, at the end of which he expects you’ll leave thinking, ‘Yeah, it was alright’.” And 300 words later “the consensus is, ‘Yeah, it was alright’.” Where Simonsen compared the empathic awkwardness of watching a struggling act to the straightforward joy of watching a man fall down the stairs, Ensall returns to this theme as he wraps up the audience’s (assumed) emotions: “The empty gurgle of mortification, like the weightless feeling of falling down the stairs.”

Whereas most reviewers are comparable, in some measure, to one of their own peers in style, Ensall seems to have taken most of his inspiration from William Faulkner. It’s bold, lucid prose but also has a great sense of space, atmosphere and – for my money – melancholy. Even when celebrating something as fluffy as Cassetteboy vs DJ Rubbish there’s such a tinge of despair in “those sheepishly sat at the back of the room start to get their groove on” that when he tells us “It was near impossible not to have a good time” I remained unconvinced.

In fact I’m reminded of an uncle of mine who would tell you, sombrely, that your Christmas present to him was exactly what he wanted, while leaving it half unwrapped on the floor by the plastic tree.

Jonny EnsallWriting for TIME OUT (Reviewed in 2014) 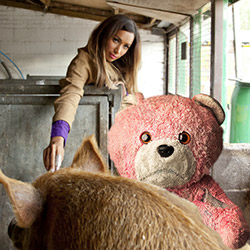