Blimming hell and a half. I tell you what – if this Panda ever gets out of its packet and decides to perform at the Edinburgh Fringe, she hopes that Alix White comes to review her.

White is ebullient in her admiration of almost everything she’s sent to see; to the point that you wonder whether she’s on uppers. “I went to this show with high expectations – which were completely exceeded” is a typically tropospheric comment of hers. Packet Panda does not suggest that Rob Auton’s Sky Show was unworthy of such hyperbole (because of course it is/was entirely worthy), but wonders where, exactly, Ms White’s expectations lie.

“I challenge you to find anything you don’t enjoy in the five act line up.” “I absolutely have to see this show again, with as many friends as I can convince to go before the Fringe is over” “I was holding on to my seat for fear of giggling myself onto the floor!” even when she views something that was heavy on the conversation and light on the jokes, White limits her criticism to “you could be excused for thinking you were having drinks and a long overdue catch up”.

If White’s journalism was sloppy then it would be easily to dismiss her as a star-struck wannabe who’s scared of causing offence. But her writing is pretty tight and the points she makes are succinct. It seems that she really does love seeing comedy of all types, and there’s very little value in me criticising that.

One act, I won’t say who, got a much better review from White than he did from most other reviewers. White explains “I am not as easily offended, and jokes about inter-species relationships weren’t completely lost on me!” Speaking as a broadminded panda: long may such tolerance  continue. 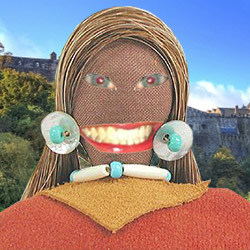