For any comedian older than about 35, bringing your comedy to the Fringe has a special pitfall: the sizable chance that, if you speak on any subject other than snogging, worrying about your genitals and handing in a dissertation, the 17-year-old student reviewer will brand your material “not always relatable”.

So it’s nice that Will Pope says that Jeff Green is “so enjoyable” because “the audience can identify with so many of the issues he tackles; from marital tension to the joys and difficulties of parenthood, and the reality of coming to terms with failure”.

It’s a good thing when you can’t quite place a reviewer’s age by the things they say. Pope does some youngish things, such as putting himself in the frame too much – his Adam Riches review is peppered with “I was expecting” this or “I was disappointed” by the other. He also has a bit of a tic about asking rhetorical questions and using turgid reviewerisms such as “dry and pedestrian”. But at other times his prose is elevated and mature.

Indeed, Pope makes a decent fist of summing up what he sees in general terms. He needs to go in for the close-up a bit more: he’ll rattle on about seamless segues and universal truisms and brilliant anecdotes without providing a single example. Nobody wants Pope to give the game (or any punchlines) away, but if something’s worth seeing then he needs to whet our appetites with more than adjectival bluster.

We can add to this Pope’s habit of throwing stars around like John-Paul the Second doing beatifications. Everything so far this year is a five-star hit, apparently. But then I’m always rather unsure about how much to needle critics for really liking stuff, even if they claim to like everything. Since Pope makes a detailed case for everything he approves of, I think I won’t.

Comments on Will Pope

Will PopeWriting for BROADWAY BABY (Reviewed in 2015) 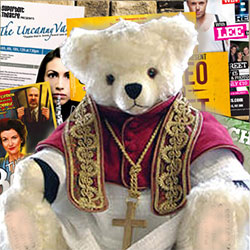