Tony Makos approaches reviewing with the right attitude. He opines that Nadia Kamil’s first solo hour “is all over the shop, and barely hangs together in places”, but nonetheless grants her four stars because “it’s clear she’s having nothing less than an amazing time”. Makos puts his analytical skills behind his gut reaction in most of his critiques. It’s something more reviewers should do.

Refreshingly, Makos reacts positively to silly things that a lot of reviewers roll their eyes at. (This reviewer-reviewer is constantly gobsmacked by publications lauding Tony Law’s “glorious silliness” when they’ve derided and dismissed him for precisely that for the previous decade). Makos, though, always reacts positively to something silly. “You’ll leave completely convinced there’s nothing wrong with a grown man wearing a real suit to watch his imaginary football team play in an imaginary FA Cup final,” he says of Tony Jameson’s Football Manager Ruined My Life.

Naturally, Makos is a fan of Gráinne Maguire,  although he observes: “There’s so much squeezed into this show that it almost falls apart more than once”. Makos does seem a bit obsessed with things hanging together, falling apart or otherwise maintaining cohesion, but such a statement is usually a precursor to getting four stars. I could muse over that further but I’m not a psychiatrist.

Makos has a lovely turn of phrase: “It’s almost as if he’s forgotten his own aphorism,” he says of one of his less-admired acts (it makes sense in context).

The only criticism I can really make of Makos is the occasional sentence where his art deserts him and his inner 14-year-old takes over. There’s “This reviewer pretty much lost his shit” while watching Mary Bourke, and – concerning Mark Thomas – the startlingly myopic “Few people can consider the activist-comedian’s political work over the last 20 years to be anything but right”. Talent should not lead to incontinence and, frankly, if the consensus thought Mark Thomas was right he wouldn’t have much to campaign about, would he?

Tony MakosWriting for THE SKINNY (Reviewed in 2014) 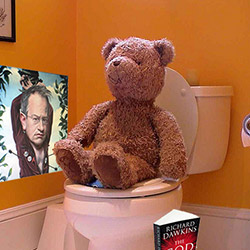