Anyway, to start my discussion of Troy Holmes, here are some words and phrases that she uses: “Painfully terrible stand-up”, “annoy the meager audience”, “two of the least talented, least funny people ever”, “no one in their right mind would ever pay to see it”, “ramblings”, “terrible”, “boring voice and even worse jokes”, “high pitched wittering”, “the most annoyingly grating woman on the planet”, “absolutely nothing”, “no laughter whatsoever”, “these narcissists can’t fill a whole hour with their pointless babble”, “not amazing”, “constant jabber”, “absolute horror”, “tortured”, “steer clear”, “completely and utterly pointless”, “devoid of any and all talent”, “a bore to sit through”, “You would have to pay me a lot of money to make me go back and watch it again”, “inane twaddle”. Wow. And these are all in one review!

I’ve never believed the old saw that Americans don’t get irony and nuance but I had to resurrect my prejudice when I read her review of the Graham Fellows creation Brian Appleton: “Fellows simply does not have enough distance from Brian Appleton, it no longer feels like parody, which is the main problem with this show.” Does this mean that it was too well acted, or that there was no knowing wink? When has a comedian ever been accused of having too little ‘distance’ from the character they’re playing?

Intrigued by Holmes I went off piste a bit and was amused to see that she had deigned to review one (one, mark you) exhibition, the 151st International Exhibition of Photography “selected from a worldwide entry of more than 2500 by a panel of distinguished international judges”. So you might expect BB to send a distinguished judge of its own or, at least, someone whose appreciation of the visual arts takes her to more than one exhibition a year.

Nah. They sent Troy Holmes. Holmes gives it two stars, calling it “mediocre at best”. But there was “at least some talent housed in this terribly-curated room”. What is that word Americans use for shameless cheek… is it chutzpah? Holmes has lots of that. 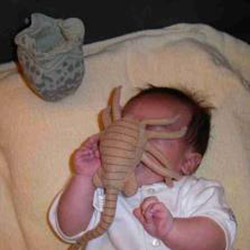