Stewart McLaren suggests that he has done a Film & Media Studies BA in the statement “this persistent post-modern breaking of the fourth wall completely breaks the flow to an unnecessary extent”.

Whether or not it’s true, he certainly has all the hallmarks of a student amateur reviewer. There’s nothing particularly objectionable about his critiques, and there’s nothing particularly edgy about them either. The prose is baggy; in his writeup of Jim Campbell it’s so caught up in itself that it  moves through concept, tone, several routines and a conclusion all in one pantagruelian paragraph.

He often lets ideas run away until they have accumulated a pile of clauses and qualifications. In the sentence that concludes his review of Jim Campbell, McLaren piles preamble upon preamble until he forgets that a sentence really needs to have a purpose: “Not a show that takes too many risks or that will cause any major controversies, even despite the occasional risqué subject matter, but it is a finely-detailed satire on the human race and one worth checking out to find out just how stupid we actually are.”  Also, listing things that were talked about is little help to the prospective comedygoer. There’s too much of this “the set include [sic] his insights on Flipper the dolphin, racism, dyspraxia and Jurassic Park”. Reading the set list isn’t critique.

McLaren is, however, generous in stars and in spirit and has no preconceptions that comedy should be polished, professional, or even entirely enjoyable. He calls Pekka and Strangebone’s Comedy Showpiece “uncomfortable comedy at its finest”, for which I can only agree with him. 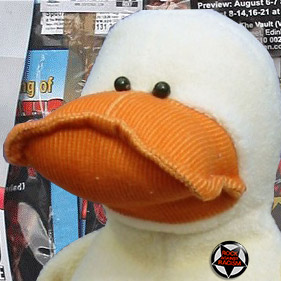