Just how hard is it to please Sean Bell? Well, take his review for Jonny and the Baptists: “None [of the songs] fall flat, but the band’s strengths are also their weaknesses, since they demonstrate just how indebted they are to acts like Flight of the Concords and Tenacious D, two painfully obvious influences.” In a festival with more than 900 comedy shows, Bell is annoyed that something good reminds him of something else that’s good.

The fact is, with Bell EVERYONE’S strength is also their weakness. Just as Jonny Donahoe’s “relentless enthusiasm” can be “a little overwhelming”, we find that Josh Widdicombe, “unburdened with any stylistic concern other than being funny” is “sparse and unsatisfying as a whole”.

Yet, unsatisfied with beating acts about the head with their own talents, Bell likes to show that he can circumvent even the stated conceit of a show to find fault behind it. He accepts that Tony Jameson’s Football Manager Ruined My Life is for a specific demographic, but  “beyond the esoteric subject matter, the story that Jameson tells—one of 20-something uncertainty and arrested development—is very familiar territory”. Similarly, Phil Ellis’s Unplanned Orphan, a show that deliberately falls apart, “becomes just what it is pretending to be.”

Bell gives away far more than he intends to when stating that Ellis’s show “requires a huge amount of good faith, which many Fringe-goers may not be prepared to give”. Bell may be the best example of the lack of good faith that has drained the fun from recent Fringes. In fact reviewers like Bell have faith in nothing, except their own meagre talents, as his batch of two-star reviews and almost obsessive use of the word ‘could’ and ‘should’ testify. Joey Page should have done this. Jason Byrne could have done that.

Bell is not a reviewer who minds causing a stink. But his strength is also his weakness, as it demonstrates just how indebted he is to the piles of dogshit in the Meadows, and the puddles of tramp piss on the Castle Steps – two painfully obvious influences.

Sean BellWriting for FEST (Reviewed in 2014) 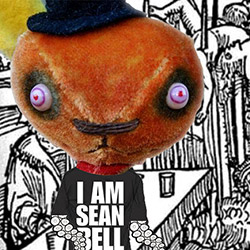