A Piggy Interview WithPity Laughs (A Tale of Two Gays)

Will: It’s something of a sequel to our 2017 Fringe stand-up show of the same name.

Mark: This one’s much more exciting; it’s a live gay sketch/stand-up/multimedia comedy extravaganza! There’s a bit of everything in there. We get up on stage and make jokes about being gay in as many different ways as possible.

Will: At its heart it’s an exploration of what it is to be gay… or at least it would be if it had a heart. It straddles silliness, darkness and unsentimentality in a way you might not have seen at the Fringe before.

Mark: I’d rather not talk about it.

Will: Allow me! We were both on the bill at an open mic night in South London, at the end of which an award was presented to the audience’s favourite act…

Mark: Which, on that occasion, was Will. As I said, I’d rather not talk about it.

Will: I like to ring the organiser of the gig, cancel my spot, eat a KFC Mighty Bucket For One and wonder how it is that I’ve been doing the same five minute set for almost two years.

Will: A lovely man from Broadway Baby gave us five stars last year and (according to our producer) we were the first comedy show of 2017’s fringe to get five stars from them. That was a great day.

Mark: A woman on Facebook wrote “felt like four hours and couldn’t wait to leave”, gave us one star and then wrote us an essay via private message describing our show as ‘devoid of intelligence or wit’ among many other dreadful things. One of her suggestions was to include content warnings (last year’s show was rather dark), a suggestion we have followed. Among the content warnings for this year’s show are:

Will: Oh god yeah, automatically Googling your show name every two hours is a traditional part of my Fringe experience.

Mark: If either of us can put down our 1980s magazines featuring soft-focus photos of oiled, naked men than yeah, sure, why not.

Mark: Painful as it is to admit, they’re usually right about something, even if that something is that the show’s not as good as it should be. Reviewers’ comments can and have been incredibly helpful.

Will: Aroused if they’re men who are hot.

Will: I’m not au fait with the laws surrounding this issue, but however important you claim the ‘context’ is, if one has worked that hard to contrive a (feeble and unfunny) excuse to repeatedly say on-camera that obviously upsetting phrase, one is clearly out to upset people. In such a case, one is not a comedian but a provocateur and therefore should not be upset in the slightest to have provoked legal consequences as a result of one’s tedious actions.

Mark: *has been asleep for the second half of Will’s sermonising*

Will: How fit Gareth Gates is; there’s nothing funny about that.

Mark: ‘For comedy’ is a broad term. Shows like the magnificent Hannah Gadsby’s ‘Nanette’ have proven that difficult and upsetting topics can be discussed in the context of a comedy show. In fact, our 2017 show made repeated jokes at the expense of my parents’ untimely deaths from cancer and suicide. I’d say the greater the skill, intuition and instinct the comedian possesses, the fewer the subjects unsuitable for comedy.

Mark: I came runner up in the 2018 Max Turner Prize hosted by the Cavendish Arms, that was a fantastic gig.

Will: That one I told you about when I won that award. My first gig. I haven’t advanced one iota.

Find Pity Laughs on the web - 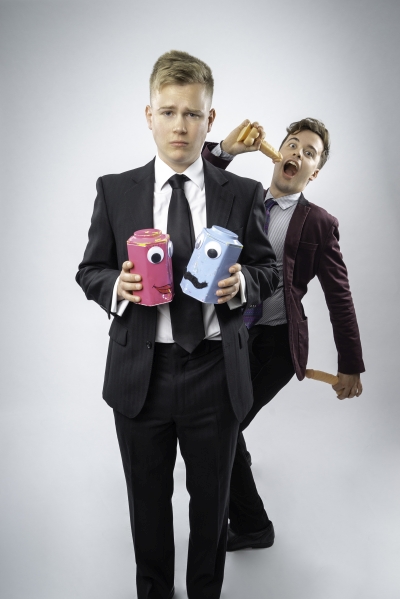 Find Pity Laughs on the web -

At its heart it’s an exploration of what it is to be gay… or at least it would be if it had a heart. It straddles silliness, darkness and unsentimentality in a way you might not have seen at the Fringe before.