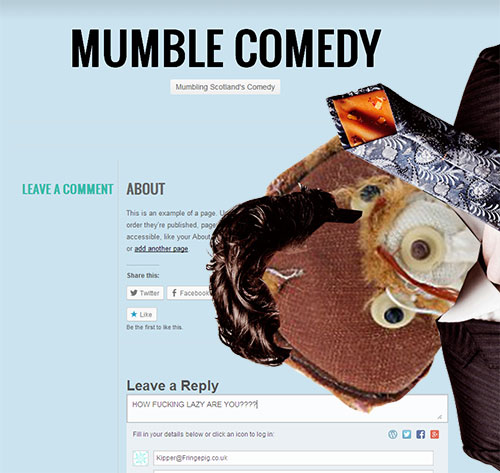 Three years ago a little-known and ill-regarded WordPress blog site managed to get taken seriously as a Fringe review site, and since then we’ve all been forced to take it semi-seriously.

It’s all the fault of one Dan Pursey at a PR company called Mobius, which in 2014 demanded that the Mumble website amend or withdraw a ‘disrespectful’ review of Adam Riches. The Mumble Editor Damo Bullen replied that “We cannot be bullied out of our integrity”. Both sides were happy to talk to Chortle about it, who gleefully wrote a piece that just made Riches look bad and pointed out how crap Mumble Comedy is as a website. Which prompted someone to ask us why WE need to tell people how bad most Fringe review sites are when Chortle has been doing that for years? (The moment Sheila from One4Review died, Chortle was there to remind us that her reviews were crap).

Back then the Mumble empire comprised some ‘About’ pages that still had default text from WordPress telling them to put something there; the gifs they used for their stars still had the Shutterstock watermark stamped over them. There were whole categories set aside for theatre and dance and plate-spinning and interprative jelly brawling, and none of it had actually been filled in with anything. The Riches review in question looked as if a three year old with English as a second language had written it in green crayon at the back of a schoolbus. In short, it was a classic teenage-bedroom effort; sad but – like the refugee crisis or a nutter at the bus stop, nobody felt the need to get involved before the Riches Mobius thing.

On the back of this incident, Mumble has filled up its categories and slowly got rid of the really silly stuff. Reviews that say a certain routine doen’t work are no longer accompanied by Youtube clips of the routine very much working. The writing isn’t quite as apocalyptically mad or inpenetrable. The stars now come without copyright watermarks (so yes, it seems you CAN buy stars).

The Mumble is still a bedroom operation with reviews that scroll up in blog format and no sign of editorial control. At Fringepig we still find it impossible to ascertain, from the ever-growing raft of reviewers’ names, which ones are real people and which are just pseudonyms of Damo Bullen or Mike ‘Divine’ Calvert, who may himself be a pseudoym of Damo Bullen. Or vice versa. Perhaps it’s a big gruesome clusterfuck of people like in that 1989 film Society. It doesn’t really matter very much because none of them can write, and if you ask them to clarify (we did), Damo Bullen sends you a book of erotic sci-fi space poetry as proof that he is  an undiscovered literary genius.

To this day Mumble‘s reviews are entirely unpredictable; a good one very much depends on whether the Mumbler sent along understands what they are seeing, went to the right show (there are reviews in the Mumble cannon where the reviewer freely admits he didn’t), and wheher they face the right way and remember to breathe. 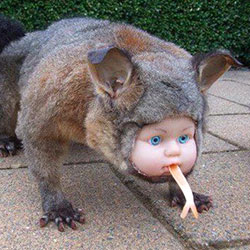 As ever when venturing into the undergrowth of Mumbledonia, we have to ask ourselves “Is this a real person, or ...
Read More 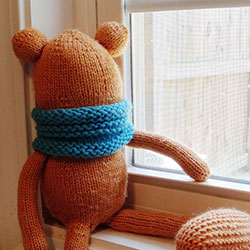 Oh Mumble Comedy, must we play this game again? Oh fine. Here we go then. Louise Mason is a real ...
Read More 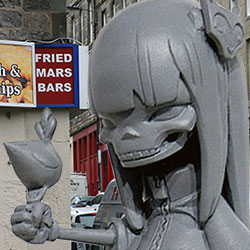 I feel slightly stupid reviewing Sarah Lewis, as everyone else in the Fringepig office is convinced she doesn’t exist. I ...
Read More 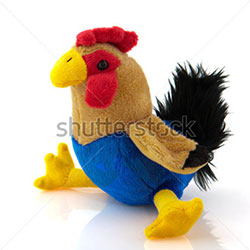 I don’t know why this reviewer has awarded himself divinity.  Perhaps he bears a passing resemblance to John Waters’ favourite ...
Read More
1 Star, 1/2 Star
Previous PublicationShortcom
Next PublicationEdfringe Review