Nobody could accuse Pujos of being dismissive about what she sees. Bloody hell no. She attends comedy shows as if she’s been asked to take notes for a Hague War Crimes tribunal; presenting each point before cross-examining it and (usually) finding it guilty of something. This jurisprudence is not in the service of seeing both sides of any argument: far from it. Pujos puts everything she sees through the wringer of watery liberal safe-space university batshit bullshit, and to such an exceptional degree that her schtick becomes oppressive and quite depressing to read.

I’m sure Kae Kurd, for example, is a very funny man but he is done little favour by Pujos’ heavy-handed advocacy. “Addressing the increase in open racism and hate crimes post-Brexit and Trump, Kurd’s strikes me as a necessary voice in comedy in current times,”Pujos attests. “The events in Charlottesville particularly poignantly indicate the relevance and pertinence of comedy shows like his.” Erm… he’s trying to have a laugh on the Free Fringe, Laura; not rescue neo-liberalism from the Nazis.

You get the distinct feeling that Pujos hasn’t seen much comedy; the sheer length of her Kurd hagiography is, to say the least, unneccesary – as is her tortuous deliberations on whether to throw Rosie Wilby’s Breakup Monologues in the bin (it didn’t actually include Rosie Wilby on the day she saw i which, we sense, threw Pujos into an existential panic). Little surprise that when she doesn’t like Thom Tuck’s discussion of ISIS and the Middle East, she uses his review to sing the praises (yet again) of Mr Kurd, the one other comedian she has seen talking about ISIS in her entire short life. Pujos makes it absolutely clear that she supports Jim Crow laws on comedy: “Tuck, a white non-Muslim comedian, is ill-positioned to make half the jokes he does,” she says. Er… what?

She continues: “Particularly problematic moments include a gag that belittles and disregards the seriousness of alcoholism as an illness,” as if Tuck has been abusing patients rather than performing comedy.

The extremist butt-rod isn’t even Pujo’s main problem. It’s not even that she is inexperienced and witheringly boring (her 143-word explanation of how Grainne Maguire pronounces her name will have you praying for death to whichever God is available, whatever your creed and colour). It’s that ALL her reviews really are about herself and her modernist, millennial search for self-betterment. It’s all “I thought” this and “I expected” that and “Oh how disappointed I was” about the other. The sheer pomposity of Pujos’ self-entitled tracts is occasionally hilarious; things are always “sadly” or “disappointingly” not what she wanted, and we should be in no doubt that this sadness and misfortune is universal.

You may wonder whether Pujos even understands her own liberal wahabbism. “They Mail on Sunday’s branding of Tuck as ‘the next David Mitchell’ led me to expect some erudite political commentary,” she says. Well who’d expect the Mail on Sunday to give you a bum steer on who to watch at the Fringe, Laura.

Laura Pujos knows three fifths of fuck all about comedy, and she wants to tell you about the profound personal journey she had watching four and a half hours of it. 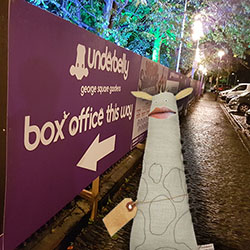