You see how difficult this is, don’t you? I hope you do. Jules Sanderson only reviewed two comedy shows in 2014 (or ever) and she gave them both three stars. And now I have to make you all a lovely rich soup out of this twig and stone. Hang around the Library Bar long enough and you’ll hear some reviewers complaining that they can’t think what to write after seeing a whole hour of some poor fucker’s SOUL. But it’s fine. All the stuffed toys at Fringe Pig are professionals.

So: Jules Sanderson seems to be one of those reviewers (and I say ‘seems’ because, let’s face it, two bloody reviews is hardly enough to build a watertight case, is it?) who fixes her own story onto a show like she’s wrestling it into a straightjacket. You know those reviews that go something like “Imagine you’re 5 years old. And imagine your parents have just exploded. And imagine you decided to find the humour in that. Well that’s what Finnbar Wankstaff does in Mummy Daddy Boom…”?  Well, Sanderson is a gulp of that sort of water, at least in half of her vast canon when discussing The Bravery Test.

Sanderson gives us one of those glorious moments when art is judged by impassive bean-counters and we all wonder what the point is anymore: “Personally, I enjoyed Dave’s act on male anorexia slightly more than Robyn’s set on the death of her partner”. Yeah Robyn, up your game. This isn’t the open mike circuit.

Looking at Sanderson’s appraisals of other, inferior art forms, it appears that she is the sort of critic who concludes by saying “If you like your comedy winky wanky poo, then look no further than Twaddle Diddle Dee.”

Apart from that she’s alright. 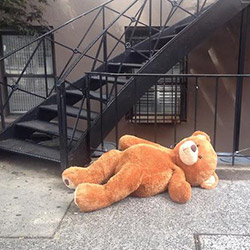